Mathew, Sridharan, and Sudhamani: A study of the association of psoriasis with metabolic syndrome from a tertiary care centre in Kerala, South India

A study of the association of psoriasis with metabolic syndrome from a tertiary care centre in Kerala, South India

Context: Epidemiological data demonstrate that psoriasis patients suffer from a spectrum of co-morbidities such as cardiovascular disorders and metabolic syndrome (MS).

Methods and Material: 51 patients with a clinical diagnosis of chronic plaque psoriasis were taken for the study. Metabolic syndrome was identified with the National Cholesterol Education Program’s Adult Treatment Panel III guidelines.

Conclusions: MS was found to be more in psoriatic patients, even though it was not statistically significant. Psoriatic patients with MS had a higher mean age, later age of onset, higher BMI and higher prevalence of psoriatic arthritis than those without MS.

Psoriasis is a common, chronic, inflammatory and proliferative condition of the skin, in which both genetic and environmental influences have a critical role. Recently psoriasis has been increasingly associated with metabolic disorders including obesity, dyslipidemia and diabetes.1, 2

The Metabolic syndrome (MS) consists of a constellation of metabolic abnormalities that confer an increased risk of coronary artery disease (CAD) and diabetes mellitus. Metabolic syndrome can be diagnosed according to the National Cholesterol Education Program (NCEP): Adult treatment Panel III (ATPIII) guidelines.3

The present study aims at finding the prevalence of metabolic syndrome and its individual components in psoriatic patients to that of age and sex matched control populations.

This is a hospital-based, comparative cross sectional study done in patients attending the Dermatology OPD over a 6 month continuous fixed period. All patients with age of 18yrs and above and with a clinical diagnosis of chronic plaque psoriasis lasting atleast six months were taken for the study. Patients who had taken specific systemic treatment for psoriasis in the last one month prior to enrolment in study were excluded. Age (± 2yrs) and sex matched non psoriatic patients who were apparently healthy and had attended the outpatient department for common diseases being treated in our daily practice like various forms of eczema, infections, pigmentary disorders, urticaria etc and who were not on any other specific systemic treatment were taken as control.

Data was collected from both the enrolled cases and control population in a pretested structured questionnaire and the data was analyzed using appropriate statistical software. All relevant examinations and investigation were done. Severity of psoriasis was assessed according to the Psoriasis Area Severity Index (PASI) score.

Analysis was carried out using the Statistical Package for the Social Sciences {SPSS} version 13 software. Standard descriptive statistics such as mean, standard deviation, and prevalence proportion were computed. Chi square test and Student’s t test were used where appropriate. The study was approved by the institutional ethical and research committee.

The study population included 51 psoriatic cases and an equal number of non-psoriatic controls attending the department of Dermatology OPD.

36% of the total population enrolled in this study were found to have the metabolic syndrome. MS was found in 21(41.2%) of the psoriatic patients compared to only 16 (31.4%) of non-psoriatic controls, but this difference was not statistically significant. The prevalence of MS in the different age groups in cases and controls are charted in Figure 1.

Descriptive characteristics of cases and controls

Comparison of the descriptive characteristics of cases with and without MS 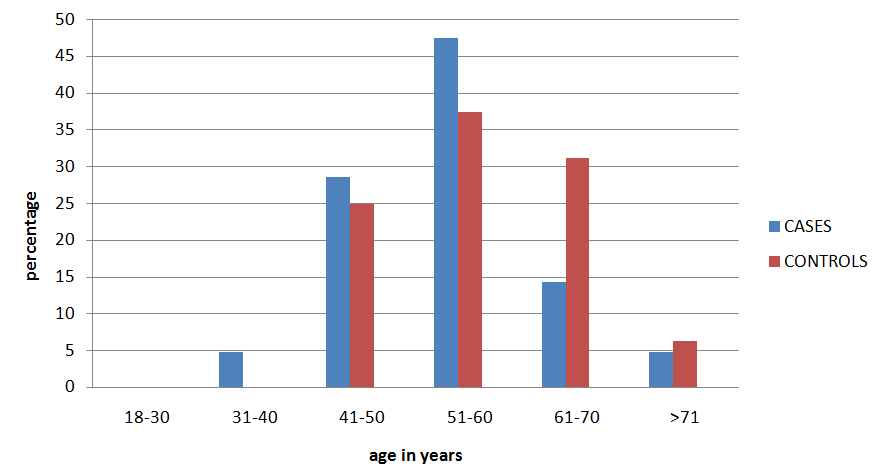 Comparison of family history of parameters in cases and controls

Comparison of family history of psoriasis, HTN, DM, dyslipidemia (DYS) and CAD in cases with and without MS

51 consecutive chronic plaque psoriatic patients who satisfied the inclusion criteria were included in our study along with an equal number of age and sex matched control population. Males were the predominant sex in our study with a male to female ratio of 3.25:1. The increased prevalence of psoriasis in males as compared to females was in concordance with the findings of other Indian investigators like Mehta 4 and Verma7who had reported a male to female ratio of 4:1.

Family history of psoriasis was seen in 9.8% of the cases compared to none in the control population. That genetic factors play a role in aetiology is supported by Sharma et al,8 Verma et al 9 and Lal S 10 who showed a familial occurrence of 7- 36%. Mean age of onset of psoriasis in those with family history was at around 37.4 years compared to later onset at 43.65 years in those with no family history. Kaur et al10 study also showed earlier onset at 23yrs in patients with family history compared to 28yrs in others. The mean values in our study were probably higher because we included a minimum age of 18 years in our inclusion criteria.

Psoriatic cases with MS had a higher prevalence of smoking (38.1% Vs 33.3%) and alcohol consumption (33.3% Vs 20%) compared to those without MS. According to ATP III, cigarette smoking is considered to be a major risk factor for developing the MS and our study also showed that 44% of smokers had MS compared to only 33.76% of non smokers who presented with MS.

It was noted that the largest group with the MS was in the age group 51-60 years and MS was higher in the cases than the controls from the 4th to the 6th decade. Gisondi et al 5 documented a higher prevalence of MS in psoriatic patients than controls after the age of 40 years. Majority of the cases with MS had age of onset of psoriasis after 40 years of age (71% Vs 29%) suggesting that increasing age may favour metabolic risk factors which may precipitate psoriasis or vice versa.

Raised values of waist circumference as a measure of central obesity, though not statistically significant (p-0.4) was found higher in the psoriatic cases which was a finding similar study by Nisa et al. 6 Statistically significant higher values for waist circumference were found in cases in the study by Gisondi et al5 and Kothiwala SK et al. 11 The mean BMI at 24.1 was higher in the control population compared to the psoriatic cases with mean BMI of 22.7. This was in contrast to earlier studies by Gisondi et al 5 and Nisa et al 6 who showed that mean BMI was significantly higher in patients with psoriasis.

There was no difference in the prevalence of low values of HDL in both the cases and controls and this was similar to the study conducted by Gisondi.5 But Ayse S et al 16 and Aruna C et al12 showed that HDL cholesterol was significantly lower in psoriasis than the controls and suggested it as a risk factor for atherosclerosis.

In contrast to the Gisondi,5 Nisa,6 Kothiwala11 and Aruna C et al12 studies where statistically significant association between total duration of the psoriasis and MS was observed, we found an almost similar duration of illness in both groups.

PASI scoring as a measure of disease severity as well as mean BSA involvement was found to be lower in our psoriatic patients with MS, compared to those without MS suggesting that risk of MS in psoriatic patients was not related to these parameters. No significant correlation was found between PASI and BSA involvement and the prevalence of MS in Nisa et al6 study also. But studies by Kothiwala SK et al11 & Aruna C et al 12 observed statistically significant association between psoriasis severity and presence of MS.

Reviews and meta-analysis 16, 17, 18, 19, 20 on the subject have reinforced the positive correlation between psoriasis and metabolic syndrome and findings have been summarized in table 5. It is controversial as to whether psoriasis results from a primary abnormality in epidermal keratinocytes with secondary inflammation (Outside in hypothesis) or from dysregulation of immune system leading to psoriatic phenotype (inside out hypothesis). 21

This study was a cross sectional study, hence the directionalty of the association between psoriasis and MS could not be assessed. The other limitations of this study were the small sample size, which probably resulted in a few statistically significant correlations in our study. Also all the confounding variables like socioeconomic status were not suitably matched.