Background: Scabies is caused by Sarcoptes, commonly seen in preschool children and adolescents. Dermoscopy is a technique involving rapid and magnified observation of the skin. Traditionally, we used history, clinical examination, skin scrapings, and adhesive tests for diagnosis, but recently, dermoscopy has been an effective non-invasive method. There are very few well-designed studies evaluating the diagnostic accuracy of dermoscopy in scabies.

Aims and Objectives: To study the dermoscopic findings in scabies and research dermoscopy's usefulness in confirming scabies diagnosis in suspected cases.

Materials and Methods: This is a cross-sectional study of 100 children aged between 1 – 15 years with symptoms clinically suspicious of scabies from July 2018 to July 2019. After a proper history, lesions were examined clinically and with Dermalite DL4 at the seven topographic areas where mite was suspected, and digital photographs were taken. Any of the signs were considered diagnostic.

Results: Among 100 children, 82 had clinical signs (burrows) suggestive of scabies, and 96 had dermoscopic features of scabies. Data analyzed with the Z test, which showed a significant difference (P < 0.05) in comparing the number of children diagnosed with scabies with the naked eye and dermoscopic examination.

Conclusion: Handheld Dermoscopy is more sensitive, accurate, non-invasive, painless, non-expensive, rapid, quick screening of many sites, and a simple technique for diagnosing scabies. Dermoscopy is a more effective tool in children, as routine skin scrapings can cause anxiety and trauma.

Scabies is a skin infestation caused by the penetration of the obligate human parasitic mite Sarcoptes scabiei var hominis into the epidermis. Scabies common in children is very contagious and mites are transferred by direct skin-to-skin contact and during sexual contact or indirect like over bedclothes.1 Under normal circumstances, the diagnosis can be readily made by history, clinical examination, ex vivo skin scrapings and adhesive tests. Dermoscopy, initially used for diagnosing pigmentary disorders, has recently been used to diagnose scabies in vivo.2, 3 The aim is to study the dermoscopic findings in scabies, and it's usefulness in confirming the diagnosis in suspected cases.

Children aged between 1 and 15 years, suspected of having scabies clinically irrespective of the treatment received.

Children not co-operative for dermoscopic examination.

Method of collection of data

It is a cross-sectional study. Patients were included after taking informed consent from the parents. All the children satisfying the study criteria presented with a history suggestive of scabies, i.e., presenting with typical scabies, nocturnal pruritis, burrows, scabietic nodules, and positive family history were included in the study. History, detailed clinical and dermatoscopic evaluation were made for all the patients. Children were examined at seven different sites, which are common sites of involvement of scabies: Web spaces, ﬂexural aspect of wrists and elbows, axillae, umbilicus, buttocks, and genitalia for the presence of burrows. Apart from burrows (Figure 1), the infestation of the mite also presents with papules, vesicles, pustules, and nodules in the affected sites. The presence of any of the above clinical features is diagnosed as having scabies (Figure 2). The lesions were examined with a dermoscope at seven topographic areas where the mite was suspected, with Dermalite DL4 ×10 magnification.

A total of 100 consecutive patients satisfying the criteria are included in the study after obtaining informed consent from the parent. The mean age is 12.3 years, and the majority are males with an M: F ratio of 1.7:1. Nine patients are below five years of age, while 42 are between 5 – 10 years of age and 59 patients are between 10 – 15 years. The most common age group in males is 10 – 15 years while in females it is 5 – 10 years. The majority of the families are from a rural background with a low socioeconomic status. The most common presenting symptom is pruritis with nocturnal exacerbation. A positive family history of scabies is seen in 53 cases (Male – 36, Female – 17), and Nocturnal Pruritis is seen in 61 cases (Male – 44, Female – 17). All the patients underwent naked eye and dermoscopic examination. The most common site of involvement is web spaces, followed by the umbilicus and axillae (Table 1). A total of 82 patients were diagnosed as scabies with naked eye examination alone. Among these, there are 52 males and 30 females. Using dermoscopy, 63 males and 33 females, a total of 96 cases are diagnosed. Comparing the two modalities, there is a statistically significant difference among the two with a P-value of 0.0016 (Table 2). This determines that dermoscopy has added diagnostic value to naked eye examination in the diagnosis of scabies. Dermoscopy had a sensitivity of 97.56% and a positive predictive value of 83.33%. Among the different signs on dermoscopy (Table 3), the Delta glider sign (Figure 3) is observed in the majority (82; 85.4%) with a sensitivity of 84.15% and a positive predictive value of 84.15%. Jetliner with contrail (Figure 4a) is seen in 46 (47.9%) cases, followed by an S-shaped sign (Figure 4 b) in 38 (39.6%) cases and the mini triangle sign in 15 (15.7 %) cases. Hence, the most common sign observed in our study is the Delta Glider sign.

Comparision of Clinical examination alone and with Dermoscopy 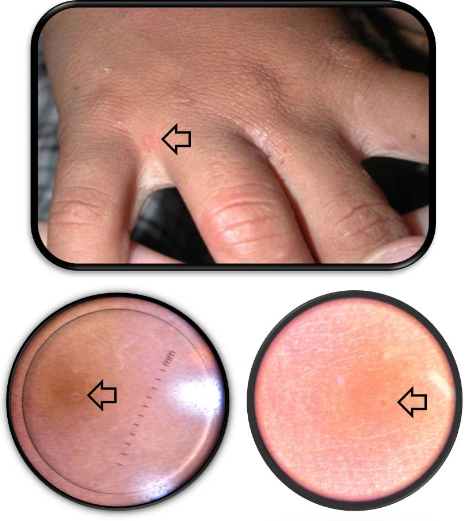 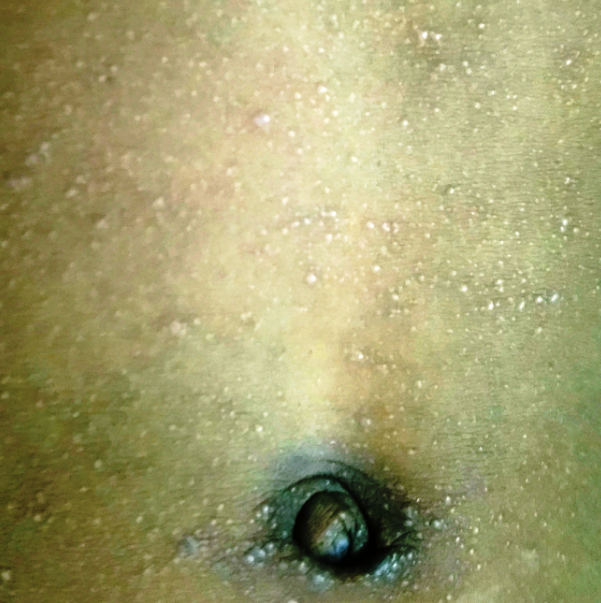 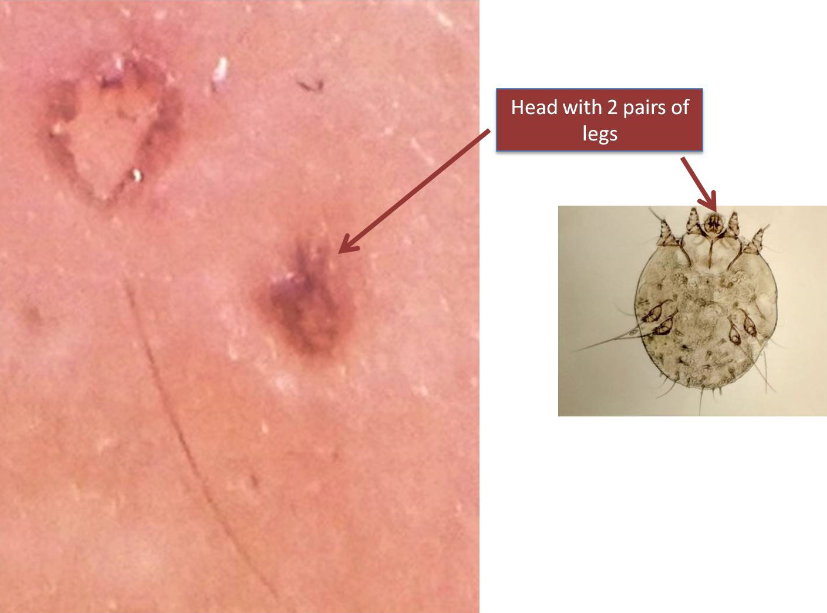 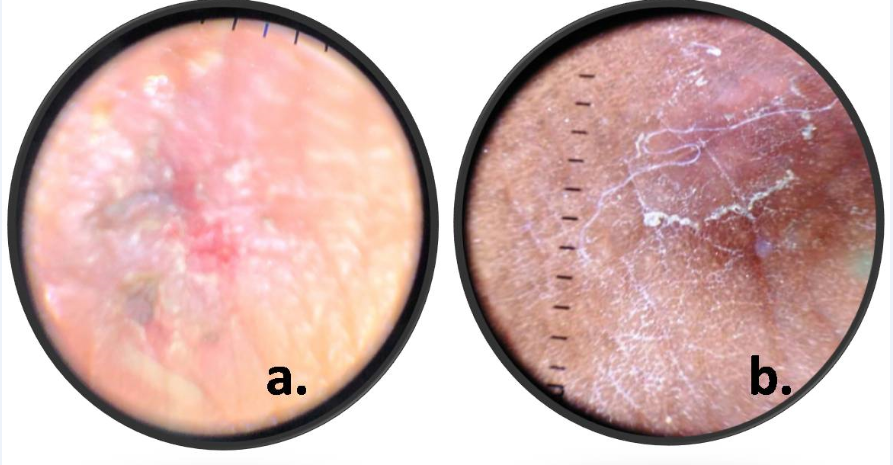 Scabies is one of the most common skin disorders in the developing world. The female mite burrows into the outer epidermis, and it has a life cycle of 30 days. Around 10 – 12 adult mites infest an affected host. The mite makes a 0.5–5 mm burrow every day, and it survives on dissolved skin and does not feed on blood. Scabies is more common among those in overcrowded conditions and has been seen to be associated with immigrants, poor hygiene, poor nutritional status, homelessness, dementia, and sexual contact.4 Symptoms will appear from two to six weeks in people who have not previously been exposed to scabies infection. In patients with previous infestations symptoms develop within one to four days.5

Nocturnal pruritis is the most characteristic feature. The primary lesions are papules, vesicles, and burrows. Secondary lesions occur due to scratching. Classical scabies usually affect the anterior axillary folds, nipple area, peri-umbilical skin, elbows, the wrists volar surface, interdigital web spaces, thighs, buttocks, penis, scrotum, and ankles. This is referred to as the circle of Hebra. 6 The only pathognomonic sign, the burrow of the mite, is inconstantly present, barely visible on pigmented skin, 7 and frequently obliterated or destroyed by scratching. 8 Moreover, Katsumata and Katsumata showed that a mite does not necessarily inhabit a burrow. 9 The presence of the mite or eggs under microscopy is considered to be one of the diagnostic criteria. 10 Dermoscopy is originally used for evaluating pigmented lesions and melanoma, but in recent times numerous indications have cropped up. Dermoscopy is a combination of a light source and magnifying lens in such a way that it enables visualization of patterns not visible with clinical inspection alone. 11

Dermoscopy offers several advantages like portability, ease of use, lower maintenance cost, and improved patient compliance as it is painless.12 The signs diagnostic of scabies are:

The classic S-shaped burrow is seen as a curvilinear trail of scale. 12, 7

A Dark, triangular, or V-shaped structure, i.e., corresponding to the mite's fore portion (head and pair of legs). This is variably referred to as "Triangle sign," "Delta glider," "Delta wing jet," "Jetplane," or spermatozoid appearance. The rest of the body of the mite shows up as relatively translucent. 12, 7

The burrow's presence with mite at its end is called the "jet with contrail" appearance or the "jetliner with its trail."12, 7

Scabies eggs are seen as ovoid structures lying within the burrows. "Mini triangle sign" refers to the maturing scabietic eggs that show the minute heads of the maturing mite within the egg.11

Faruk Alendar et al.,1 in their article, concluded that dermoscopy in scabies facilitates fewer false negatives. Confirmation of the diagnosis is required in doubtful cases like asymptomatic and treatment failure patients. A prospective study conducted by Park et al.13 comparing the skin scraping with and without dermoscopy concluded that skin scraping "with dermoscopy" is more accurate and faster in diagnosing scabies. The detection rate of "with dermoscopy" was about twice that of "without it". This study revealed the statistically significant correlation between the presence of visible burrows and the positive outcomes with dermoscopy. Birke Walter et al.,14 in their comparative study of various diagnostic modalities for scabies, concluded that when trained personnel are available, dermoscopy is a valid tool for diagnosing scabies in a resource-poor setting where skin scraping cannot be recommended as a diagnostic tool in this setting. The sensitivity was 83%, while specificity was 46%. Dupuy et al,15 in their study, showed that the accuracy of dermoscopy substantially increased for untrained observers during the study period. In this study, sensitivity for the diagnosis of scabies (91%) using dermoscopy was higher than the microscopic examination (90). In our study, we demonstrated a sensitivity of 97.56% (Upper 95% CIs 91.54 – 99.33) and a positive predictive value of 83.33%.

Dermoscopy is a simple, accurate, rapid, painless, non – invasive technique and helps in quick screening of a large number of sites for diagnosis of scabies. Its ease of use, portability are added advantages. It is specifically more useful in children, as it non – invasive and causes less anxiety. Thorough knowledge of various dermoscopic features in scabies can help prove to be the third eye. In this study, the diagnostic yield of dermoscopy was significantly higher than the naked eye examination alone. Hence, we can say that dermoscopy has a definite advantage in the diagnosis of scabies, especially in children.

B Walter J Heukelbach G Fengler C Worth U Hengge H Feldmeier Comparison of Dermoscopy, Skin Scraping, and the Adhesive Tape Test for the Diagnosis of Scabies in a Resource-Poor SettingArch Dermatol201114744687310.1001/archdermatol.2011.51