Background: In wake of COVID19 crisis and a dearth of promising medicine/ vaccine to combat the novel virus ‘Ayurveda’- the science of life, recommends immunity boosting ‘Khada’- decoction, to enhance and maintain the body’s natural defence system to safeguard self; which can lead to acute urticaria when used excessively.

Aim: To evaluate if Kadha consumption was related to the rising cases of urticaria.

Materials and Methods: Patients visiting Dermatology OPD at Belagavi Institute of Medical Sciences, Belagavi with complaints of developing urticaria between April to July 2020 were enrolled in the study after taking their due consent. History elicited and examination done. Patients were enquired specifically for consumption, frequency and duration of use of kadha along with most common ingredients used for its preparation. Drugs taken, if any were noted.

Results: Out of 64 patients reporting urticaria, a male preponderance (M: F = 1.9:1) was observed. Duration of onset of urticaria ranged from 30 mins to few days. Generalised involvement was seen in 44%(n=28); localised in the rest. None reported angioedema. Majority (n=55, 86%) gave history of consumption of kadha; with 22, 16 and 9 of them consuming khada once, twice and thrice daily, respectively. 8 consumed kadha in tea. Severity and frequency of symptoms were proportional to the amount of kadha consumed. Symptoms appeared faster in patients who consumed kadha more frequently or with tea.

Conclusion: Possibility of occurrence of urticarial lesions can be adversely related to kadha when used excessively.

COVID 19 pandemic wreaked havoc and led to unprecedented suffering to mankind. The disease primarily affects the respiratory system and leads to a host of other secondary complications resulting in medical emergencies & loss of life.1 The damage it caused was primarily because of lack of appropriate treatment coupled with a suddenly overburdened healthcare system. A lot of drugs, old and new were being tried but with little effect. India being the land of ayurveda was not the one to shy away from trying its indigenous ayurvedic preparations in fighting this pandemic.2 In fact, a lot of us still adopt to home remedies for treating common ailments. The so called ‘Kadha’ (decoction) was one such indigenous preparation from Ayurvedic pharmacopoeia which has long been used by Indians in treatment of cold, cough or flu like illness. In fact, the ministry of AYUSH of Government of India also recommended use of spices and kadha for boosting immunity and fighting respiratory diseases.3

It was during this pandemic that we noticed a lot of new cases of urticaria. It was an intriguing finding. The country was under lockdown. People were forced to stay indoors, were eating only home cooked food, overall pollution had reduced and yet cases of acute urticaria rose. It was difficult to attribute this rise to any specific reason. Though urticaria has been described as a finding in COVID, it would be unreasonable to suspect every case of urticaria as secondary to COVID, since there were no other associated findings of COVID. After a thorough questioning of these cases we found a common thread – The Indian Kadha. Hence, we decided to take up a study on this subject.

Aim of the study

The aim of this study was to evaluate if Kadha consumption was related to the rising cases of urticaria.

A total of 64 new cases of Urticaria visiting the Dermatology Out Patient Department of Belagavi Institute of Medical Sciences, Belagavi between April to July 2020 were enrolled in the study after taking their due consent. Patients were enquired about the frequency of use of kadha, duration of use of kadha and the most common ingredients used for its preparation.

All patients above the age of 18 years, of both sex reporting to the dermatology clinic with complaints of developing Urticaria de novo were enrolled in this study.

After obtaining informed consent, demographic data and meticulous history was elicited from the study subjects regarding the onset of urticaria, frequency of consumption of kadha, treatment history (allopathy, ayurvedic, home remedies), precipitating factors and co morbidities if any were noted. Detailed clinical and dermatological examination was conducted to look for the cutaneous lesions.

Data collected were entered into Microsoft excel data sheet and final outcomes were analysed and discussed in detail with the help of proportions and percentages.

MS excel and MS Word was used to obtain various types of graphs such as bar diagram and pie charts.

A total of 64 patients reported to dermatology OPD BIMS, Belagavi with urticaria were included in the study, retrospectively. Most common age group affected was 21 to 30 years (43.75%) as evident from the Table 1. There was a male preponderance (Figure 1) with 42 male patients and 22 females (M: F = 1.9:1).

Duration of onset of urticaria ranged as early as few hours (shortest 30min) to few days. Generalised involvement was seen in 44%(n=28) of the cases with transient appearance of reddish wheals and itching. The rest showed localised involvement over the extremeties, face and trunk alone (Figure 2 2a, 2b, 2c). None reported any history suggestive of angioedema.

Among the 64 patients reported with urticarial lesions 3 gave a history of Insect bite reaction; one of them had developed wheals as a result of drug reaction (Ofloxacin- ornidazole combination); 2 attributed the occurrence of urticaria to food substances, (brinjal, fish and pickle); while cause was unclear in 3 patients. Majority of the patients (n=55, 86%) gave history of consumption of kadha (Table 2). Out of 55 patients, 22 of them consumed kadha once a day, 16 of them consumed twice a day, 9 of them consumed thrice daily and remaining 8 consumed kadha in tea as depicted in the Figure 3.

The severity and frequency of symptoms appeared to be directly proportional to the amount of kadha consumed. The appearance of symptoms was also faster in patients who consumed kadha more frequently or with tea. 18 out of 64 cases gave history of taking drugs related to hypertension, diabetes, cardiac ailments and 6 other patients stated that they had been taking hydroxychloroquine as well.

Diagram representing the sex distribution of urticaria in the study patients 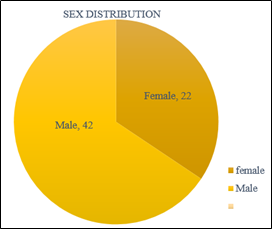 Frequency of consumption of khada 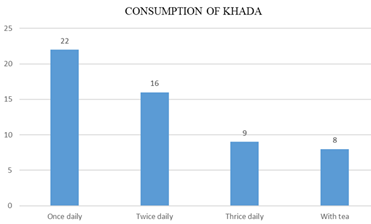 Classificationof cutaneous Manifestations of COVID19 based on the morphology

The health care system has become increasingly strained after the upsurge of Coronavirus infection. First case infected with novel coronavirus was reported from Wuhan in China.5 With that emerged several formulations from the Traditional Chinese medicine to the Conventional allopathic medicines, which were tried against the infectious agent wherein few proved successful in treating the disease while others were partially beneficial.6 Various pharmaceutical companies have been working towards development of an effective vaccine to boost up the immunity of the general population against confronting the current health crisis.

While there was no sign of an effective vaccine or cure, ‘Kadha’(decoction) was widely adopted and promoted in the Indian society.3 Various recipes of the immunity boosting kadha surfaced on the social media. The most common ingredients were Tulsi leaves, black or green cardamom, sliced raw turmeric, black peppercorns, cinnamon stick, sliced ginger and munakka, boiled in 4 cups of water.7 This recipe was commonly used to ward off seasonal flu. Since, there was no definitive treatment available for COVID, the general population easily adopted this homemade remedy to fight coronavirus. None of the patients enrolled in this study were known cases of COVID nor had fever, sore throat or breathlessness to suspect COVID in them.

COVID19 has a plethora of symptoms and skin is no exception to it. Table 3 shows a classification published in the International journal of research in dermatology.4

Urticaria, also known as ‘Hives’ or ‘Nettle rash’ is one of the most frequently seen dermatological entity in the emergency department. The term ‘urticaria’ is being used increasingly to describe a disease that may present with short‐lived itchy wheals, Angioedema or both rather than the more traditional descriptive term for an eruption of wheals. It may be spontaneous or inducible. There may be overlap between patterns of urticaria. In COVID19 Urticarial lesions have been seen more commonly in elderly patients. They appear simultaneously with other symptoms of Covid-19. These lesions are seen as erythematous wheals associated with itching. The prevalence of urticarial lesions is variable in different studies, 9.7% to 19%.8

In the present study we describe urticarial lesions in relation to consumption of ‘kadha’. We observed male preponderance with regard to reporting of symptoms. The age of patients in our study ranged from 14 to 73 years. Variable duration of onset of urticaria was documented which ranged from as short as half an hour to few days after consuming kadha. This manifestation may be attributed to the vasoactive amines or histamine releasing substances that may be present in the ingredients being used for the preparation of kadha that inturn leads to activation of type 1 hypersensitivity reaction. Traditionally ginger has been used to treat vomiting, morning sickness of pregnancy but its excessive usage can itself lead to hyperacidity.9 It has been documented that pepper can lead to worsening of Urticaria.10 It is a general perception that use of home remedies do not have any side effects. But, this article definitely raises questions on how safe home remedies can be. There have been reports of adverse events when spices are excessively consumed.11 This study was based on the reporting by the subjects. Most of the male subjects couldn’t clearly state the contents being used for preparation of kadha. Most subjects couldn’t provide a clear cut timeline about the starting of consumption of kadha and beginning of their urticarial symptoms. And the small number of cases enrolled in this study may not be representative of the general population. These were the major limiting factors of this study.

In conclusion we would like to draw the attention of readers towards the possibility of occurrence of urticarial lesions as an adverse response kadha which had been extensively used in prevention and treatment of COVID. Also the fact that, even home remedies when used excessively can have their own adverse effects.

Recipe of the immunity-boosting kadha shared by a covid-19 survivor becomes viral2020https://timesofindia.indiatimes.com/life-style/food-news