Chronic urticaria is a dermatological disease with point prevalence of 1.4% in Asians compared to 0.5% and 0.1% in European and North Americans respectively.1 Omalizumab, an anti-IgE biologic agent is an effective option for the treatment of chronic urticaria. This recombinant humanized anti-IgE monoclonal antibody provides quick and effective remission in patients not responding to other therapies.2 Omalizumab is well tolerated without any major clinical concern2 and effective in patients with chronic spontaneous urticaria resistant to antihistamines and having several comorbidities.3 Omalizumab is recommended as treatment for patients not responding to up to four fold dose of non-sedating antihistamines.4, 5

Biologics, although an attractive option, have a concern of cost.6, 7 especially in resource limited countries and for patients spending money from the pocket. Biosimilars are manufactured as an alternative to provide cost-effective interchangeable option for biologic.7 A study in Chinese healthy males showed dose dependent reduction in free IgE level after subcutaneous biosimilar omalizumab and it was well tolerated.8

A 24 year old male patient was a known case of chronic urticaria since 2 years. His previous treatments included levocetirizine 5 mg two tablets twice daily. After inadequate response to this, he was treated fexofenadine 180 mg two tablets twice daily and cyclosporine 3 mg/kg. However, this treatment also did not provide satisfactory response. There was no history of angioedema or comorbidities. D-dimer level was 0.27 mg/L (normal level <0.5 mg/L). Serum IgE level was 686 IU/ml and absolute eosinophil count level was 0.37 thou/mm3 (normal level 0.02-0.50 thou/mm3). Omalizumab 300 mg was administered subcutaneously. Second dose of 300 mg was administered after one month.

A 45 year old female was a known case of chronic urticaria since 5 years. She did not have any comorbidity. Her previous treatment included levocetirizine 10 mg one tablet twice daily. After inadequate response, she also received loratidine 10 mg two tablets twice daily. She did not tolerate cyclosporine started in the dose of 3 mg/kg per day and developed severe myalgia. Her serum ferritin level was low and C-reactive protein level was high (11 mg/L). She was tested negative for severe acute respiratory syndrome coronavirus 2 (SARS-CoV2). Serum vitamin D level was low. Her D-dimer level was 4.26 μg/mL. Serum IgE level (2.42 KIU/L) and absolute eosinophil count levels were within normal limits. She was treated with omalizumab 300 mg subcutaneously.

Both patients were carefully observed for two hours after injection for any adverse events. They were advised to take one tablet of levocetitizine 5 mg as required. In both cases, satisfactory response to treatment was observed after omalizumab administration. Response to treatment i.e. Urticaria Activity Score (UAS) is shown in Figure 1.

Improvement in disease control as measured by Urticaria Control Test and quality of life of both patients is shown in Table 1. Significant reduction in consumption of second generation antihistamines was also observed in both cases. No adverse events were seen in both cases. 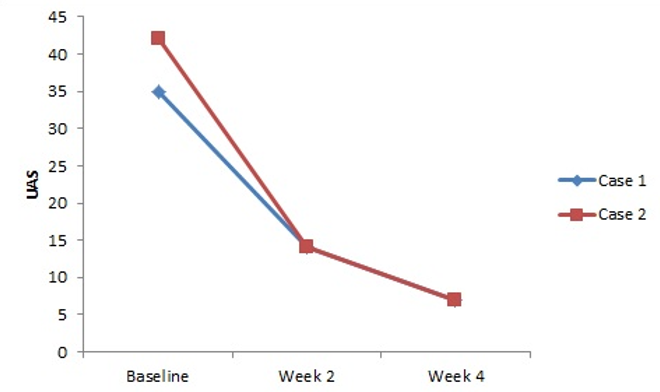 Now, original and biosimilar omalizumab both are available in India. Biosimilar represents an economical option for patients who can-not-afford high cost of therapy.

Both of our patients successfully responded to treatment with omalizumab biosimilar. Both of them had received higher dose antihistamines. One patient received cyclosporine and did not respond to the treatment. Second patient did not tolerate cyclosporine.

In India, majority of the patients pay for healthcare from their pocket, posing high economic burden. Because of the cost constraint, many patients do not afford the treatment. A randomized clinical trial in India reported clinical comparability of omalizumab biosimilar with reference product. There was no significant difference in both products for the management of moderate to severe persistent asthma.11 Our initial experience with omalizumab biosimilar in patients with chronic urticaria is encouraging. It can be used as a cost effective alternative in patients not responding to higher doses of antihistamines.

In both treatment resistant cases of chronic urticaria, omalizumab biosimilar was found to be effective and well tolerated. Thus, our initial experience suggests that omalizumab biosimilar can be a useful option for patients with chronic urticaria who do not achieve satisfactory response with higher dose of second generation non-sedating antihistamines.