Kharkar, Dhoot, Mahajan, and Barkate: A real world retrospective analysis of comparison of effectiveness and safety of mometasone furoate and fluticasone propionate in the management of eczema and dermatitis

Materials and Methods: A real world retrospective study was conducted across India to compare the clinical assessment of mometasone 0.1% cream and fluticasone 0.005% cream in the management of contact dermatitis at 236 dermatology clinics.

Dermatitis is a general term for conditions that causes inflammation of the skin. There are many different types dermatitis like contact dermatitis, atopic dermatitis etc. Contact dermatitis is one of the commonest type of dermatitis and accounts for 70-90% of all occupational skin diseases.1, 2 It is an inflammatory skin condition induced by exposure to an external irritant or allergen. A prevalence of 8.2% was seen in a recent cross sectional study of 12377 subjects across five European countries, in which a randomly selected group of 3119 patients were patch tested. 3 The condition can have a detrimental impact on personal and social relationships, quality of life, and even threaten employment. 4, 5, 6

Along with emollients the local treatment of choice is a topi­cal corticosteroid. Topical corticosteroids are a family of hydrocortisone derivative compounds with variable anti-inflammatory potency and side-effects profile. Their relative potency should be carefully considered when choosing them for treating individual patients. While the least potent corticosteroids may be sufficient in certain conditions, clinical settings, and for long-term maintenance therapy, the same medication may be ineffective in some other conditions. 7 In such conditions, mid to high potent corticosteroids are preferred. These agents are very effective in the short term in contact dermatitis. 8 Apart from this, once daily treatment is sufficient and may even be superior to twice daily application. 9

After obtaining ethics committee approval, a retrospective data analysis of medical records was carried out at 236 centres across India, to compare the effectiveness and tolerability of mometasone 0.1% cream and fluticasone 0.005% cream in the management of contact dermatitis during September 2020 to January 2021. According to patients’ clinical records, assessments were done at baseline and 2 weeks, using reduction in total symptom score and physician and patient assessment.

We considered oedema, pruritus, erythema and lichenification for calculating total symptom score (TSS). Each symptom was graded from 0-3 as none to severe category. Based on TSS after 2 weeks of treatment, patients were categorized as remarkably improved (TSS=0), improved (reduction in TSS >50% of baseline value), or no/minimal improvement (no/ less than 50% reduction in TSS as compared to baseline value). Response was defined based on the follow-up assessment at 2 weeks as compared with the baseline evaluation. Tolerability was evaluated by assessing the incidence of treatment emergent adverse events (TEAEs), treatment related AEs and AEs/SAEs leading to study withdrawal in both the treatment groups.

Binomial variables were expressed as number & percentage and continuous variables as mean (S.D.). Paired t test was used for comparisons between baseline and follow-up measurements. Significant differences between responders and non-responders were defined as those at a level of p<0.05 by paired t test.

Total symptom score in each aggravating factors at baseline

Percentage of patients achieving improvements in both groups 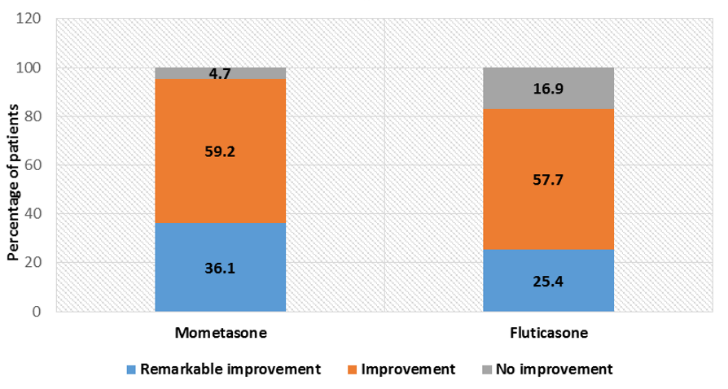 At baseline, there were 37 patients in mild category in mometasone group whereas 47 patients in fluticasone group. Out of these, 29 patients were symptom free at the end of therapy (p=0.15). But there was statistical difference between both the groups in moderate and severe category as shown in Table 4.

On further sub group analysis on aggravating factors, it was found that, Mometasone was statistically significant in relieving symptoms of dermatitis due to artificial jewellery, detergent and occlusive foot ware as shown in Table 5.

Comparison of TSS due to aggravating factors.

Both the treatments were safe and well tolerated by patients. A total of 12 patients reported AE in mometasone group and 13 in fluticasone group. There was no statistical difference in terms of safety and tolerability (p=0.2). Details of AEs are depicted in Figure 2.

Number of patients with adverse events 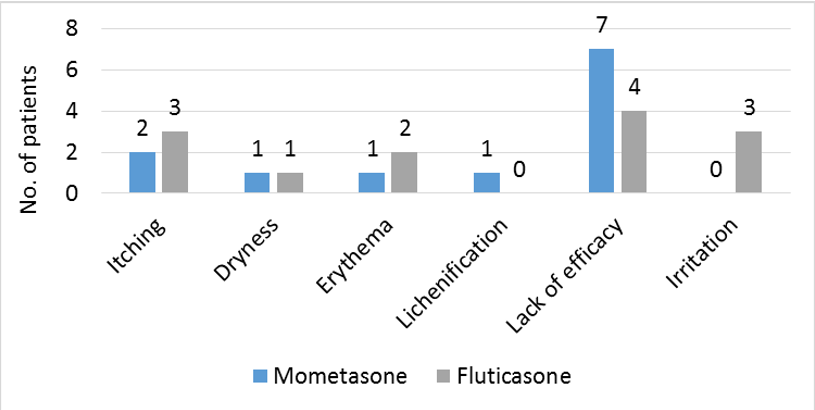 Eczema/dermatitis is one of the commonest dermatological ailments.10 Topical corticosteroids (TCS) are mainly used for management of these conditions. But there is increased propensity of adverse events (AEs) with the use of high potency TCS. Mometasone furoate cream is a medium potency TCS which will have comparatively less propensity of AEs and have reasonable efficacy.11 The present survey will be first of its kind in India to provide evidence of real world effectiveness and safety of mometasone furoate and fluticasone in treatment of eczema/dermatitis.

In the present study, it was found that use of occlusive footwear, artificial jewellery, sanitizer, detergents were commonest predisposing factors for dermatitis. Similar findings were reported in an observational Indian study by Thilak S et al. 17 Particularly, the indiscriminate use of alcohol based sanitizer in wake of COVID 19 pandemic has led to increased occurrence of contact dermatitis, wherein symptoms were resolved by use of topical corticosteroid, moisturizer and avoidance of sanitizer. 18, 19 Reduction in TSS in mometasone group was more as compared to fluticasone group in all these predisposing factors.

There was no significant difference in terms of safety profile in both the treatment groups. Once applied on the skin, ester hydrolysis biotransformation of mometasone reduces its binding affinity as it passes towards dermis. Thus, its increases the binding affinity to corticosteroid receptor in dermis is reduced as compared to epidermis and therefore the efficacy is maintained and at the same time the chances of undesirable effects are greatly reduced. 20

Thus, mometasone furoate has shown good effectiveness and similar safety profile as compared to fluticasone in treatment of eczema/dermatitis. The present study is not without limitations. Due to its retroactive design the chances of bias cannot be ruled out. It is recommended that such studies should be carried out prospectively, as multiple centres so that results of present study can be compared, validated and generalised.

Authors would like to thank all the dermatologists who provided their data for this analysis.