Introduction: Super bioavailable itraconazole (SBITZ) is a newer formulation of itraconazole which is recently launched in India. But there is no published clinical evidence of SBITZ in the management of dermatophytosis in Indian patients.

Materials and Methods: A Real world retrospective data analysis was conducted with 346 dermatologists across India to assess the response of Indian patients with dermatophytosis who were prescribed super bioavailable itraconazole 50 mg twice a day for 4 weeks.

Results: Out of 4625 patients’ data, 2743 were included for final analysis. Mean age of patients was 36.17±12.05 years with male preponderance. Most of the patients were diagnosed as T. cruris. At the end of treatment, 51% of patients achieved complete clinical cure while 46% achieved clinical improvement (>50% symptom clearance) and 3% were labelled as clinical failure. About 70% patients achieved clearance in body surface area. Mean total symptom score (TSS) was reduced to 0.74±1.1 from 7.29±1.73 while mean BSA score was reduced from 1.96±0.83 to 0.38±0.65 (p<0.05). Similar type of improvements were seen in naïve, recurrent and chronic dermatophytosis patients. A total of 61 adverse effects (AE) were reported from 56 patients. All the AEs were mild to moderate in nature and did not require discontinuation of therapy.

Conclusion: Patients treated with super bioavailable itraconazole showed greater improvement in clearance of symptoms as well as lesions. Additionally, it showed significant improvement in naïve, recurrent and chronic patients enabling its placement in armamentarium of management of all types of dermatophytosis.

Dermatophytosis is one of the commonest dermatological disorder in India and itraconazole is commonly used systemic antifungal in its management because of higher sensitivity.1 But itraconazole has some pharmacokinetic challenges like dependency on fatty food and gastric acid for its absorption and dissolution, less bioavailability, fluctuations in absorption, decreased absorption when co-administered with acid lowering agents, etc.2 Super bioavailable itraconazole (SBITZ) is a newer formulation of itraconazole which is approved across the world and has been recently launched in India. It is claimed to overcome all these challenges faced with conventional itraconazole.2, 3, 4 Moreover, all these benefits may be anticipated to improve the clinical outcomes as well as the patient compliance.5

We performed a retrospective review of all patients presented in dermatology OPD and diagnosed with dermatophytosis during September 2020 and February 2021 at 346 centers. The diagnosis was identified according to physical signs and symptoms as per available medical records. Only those patients’ records requiring systemic therapy as SBITZ 50 mg twice a day were included. Exclusion criteria included (a) Missing key data; (b) Medical records of those patients in whom treatment plan was changed during the treatment period of 4 weeks. This study was approved by the Ethics Committees (Suraksha Ethics Committee Reg. no. ECR/644/Inst/MH/2014/RR-17).

Naïve patients were defined as first episode of dermatophytosis with duration of <6 weeks. When the patient had suffered from dermatophytosis for ≥6 months, with or without recurrence, in spite of being adequately treated it was termed as chronic dermatophytosis. Re‐occurrence of the disease (lesions) within 6 weeks after completion of the treatment was defined as recurrent dermatophytosis.6

A total of 4625 patients’ data was analyzed. All the patients were treated with SBITZ along with other commonly used topical anti-fungal.

As per the medical records, total symptom score included scoring of erythema, scaling and pruritus along with extent of lesions in the form of body surface area (BSA) involvement. Each symptom/sign and BSA was scored on 4 point scale (0 to 3) which were recorded at baseline and at the end of therapy i.e. 4 weeks. The details of the scoring system are depicted in Table 1.

Data of adverse events were collected and timing and reasons were captured.

Baseline demographic and clinical characteristics are presented as percentages, mean with standard deviations (SD). Efficacy of treatment responses was estimated by percent change.

The primary treatment response outcome was evaluated at the end of 4 weeks following therapy with SBITZ. At the end of treatment, 1404/2743 patients (51%) achieved complete clinical cure, 1252 patients (46%) achieved clinical improvement and 87 patients (3%) were labelled as clinical failure. Response to treatment is shown in Figure 1. 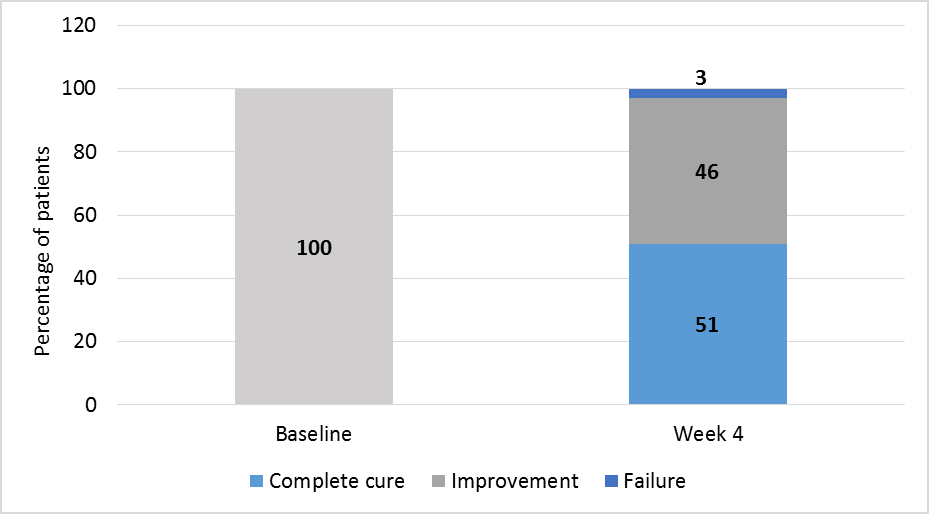 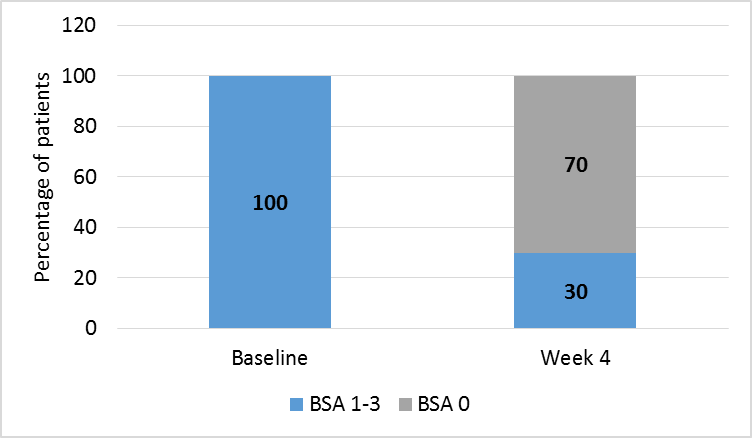 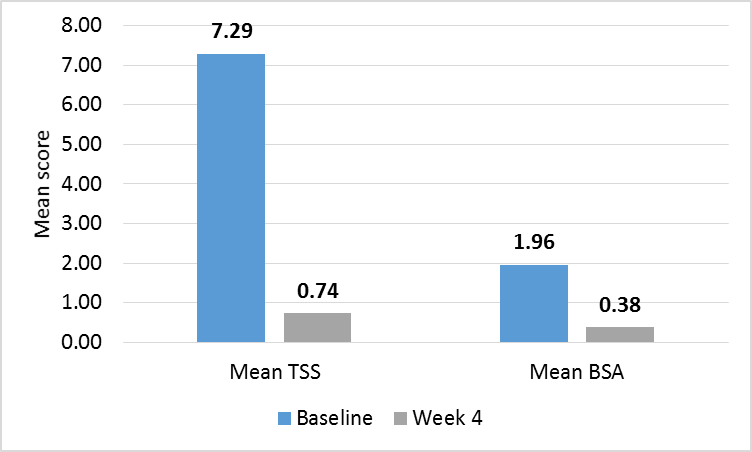 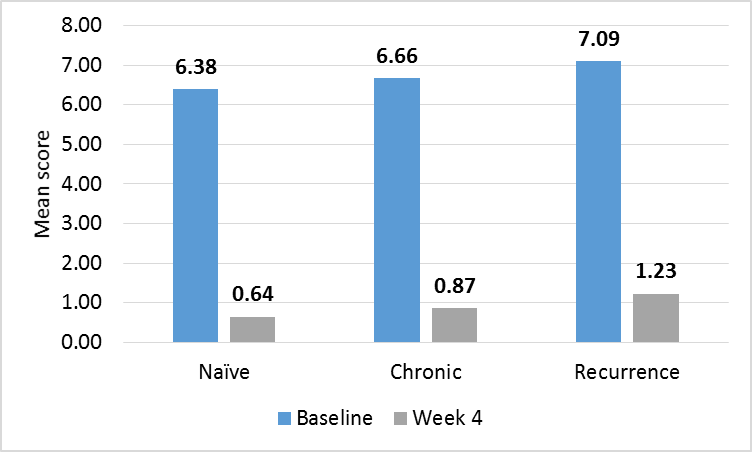 A total of 61 adverse effects (AE) were reported from 56 patients. Details of AE are depicted in Table 3. All the AEs were mild to moderate in nature and did not require discontinuation of therapy. In 5 patients, lack of efficacy was noted after 4 weeks of treatment.

Total no. of AE

The goal of treatment in dermatophytosis is complete symptom control. Due to the change in clinical presentation, there has been change in management of dermatophytosis in terms of combination of systemic and oral antifungal drugs, etc.7, 2 Though itraconazole is commonly prescribed systemic anti-fungal in combination therapy, its inherent pharmacokinetic characteristics have been one of the key limitations and are frequently overlooked in clinical practice.8 SBITZ is devoid of all these pharmacokinetic issues. However, there is no published literature on its real world effectiveness and safety in dermatophytosis.

Results of this analysis reported here indicated that the use of SBITZ in the management of dermatophytosis appeared to be generally safe and well-tolerated, with few AE. In relation to efficacy, SBITZ continued to be associated with a decrease in TSS during treatment phase, as well as with an improvement in overall disease severity as measured by BSA. In the present study, we analyzed the response on two domain; clearance of symptoms and clearance of lesions. In first domain i.e. clearance of symptoms, 51% of the patients achieved complete clearance while 46% achieved improvement. Only 3% showed clinical failure. On the basis of clearance of lesions i.e. improvement in BSA, 70% of the patients achieved complete clearance of the lesions. Similar improvement was seen in reduction of mean TSS which was reduced to 0.74±1.1 from 7.29±1.73. Additionally, mean BSA score was reduced from 1.96±0.83 to 0.38±0.65. Both the improvements were statistically significant (p<0.05). Moreover, SBITZ was found to be statistically significant in improvements of all types of dermatophytosis infections like naïve infection, recurrent and chronic infections.

The safety profile demonstrated by SBITZ was favorable. Only 2% of the patients were reported with adverse effects (AE). In a report by Lindsay et al., only 11% of the hematopoietic stem cell transplant patients reported AE with super bioavailable itraconazole which is not in concordance with our results.13 In our study, there were no serious AEs reported. All of the AEs were mild to moderate in severity, and no discontinuation was reported by any of the patients.

Patient adherence to therapy is known to be low in medical practice. Adherence can be compromised by many factors such as patient frustration due to a lack of clinical response or delayed response and by general dissatisfaction with the treatment experience or the occurrence of adverse events. In the current study, only 0.43% patients showed lack of response to treatment. But other factors like favorable tolerability profile, continued reduction in symptom score, and steady improvement in BSA in terms of extent of lesion suggested that use of an effective systemic agent like SBITZ might have had an impact on patient adherence to therapy. Improvement levels support this notion, considering that about 97% of all patients were in improvement category.

Due to its retrospective design, there were certain limitations in the present study which might have impacted the results of our study. These include prescription of topical antifungal to all the patients, non-availability of mycological examination report, non-comparison with conventional itraconazole and no data on relapse rates. Long term clinical trials are warranted to validate the results of the present study.

Authors would like to thank all the dermatologists who provided their data for this analysis.