Malhotra, Kaur, and Kaur: A prospective study of clinical spectrum of cutaneous adverse drug reactions and their incidence in Indian population

Background: Making the diagnosis of a drug-induced reaction requires familiarity with the clinical patterns as the current understanding of the disease processes is not enough to explain about apparently similar pathological mechanisms generating different clinical patterns. Therefore, it remains useful and relevant to overlay a pathological understanding with a clinical classification. This study concentrated on observing and documenting the clinical presentation of cutaneous adverse drug reactions (CADR) encountered in patients. The purpose of the study was to evaluate causality, severity and preventability of Dermatological ADRs.

Objective: To study morphological types of CADR and their incidence in Indian population Method: A prospective, observational study was carried out over a period of one year at Out Patient Department of Dermatology, Government Medical College, Amritsar with diagnosed CADRs. The suspected ADRs were evaluated for causality by Naranjo’s Probability scale and severity by Hartwig and Siegel scale.

Conclusion: Awareness about CADR is essential for early detection, management of patients and drug safety. The healthcare system can promote the spontaneous reporting of dermatological ADR to Pharmacovigilance centers for ensuring safe drug usage and patient care.

The definition of adverse drug reactions (ADR) as given by WHO is “any response to a drug which is noxious and unintended and which occurs at doses, normally used for prophylaxis, diagnosis or therapy of disease or for modification of physiological function”. It excludes supra-therapeutic doses, drug abuse, treatment failure and errors, which occur with drug administration.1 Cutaneous adverse drug reactions (CADR) are the commonest ADR (30-45%) and responsible for about 2% of hospital admissions.2, 3, 4, 5 They may range from mild (two-thirds) to severe or life threatening (one-third) in a hospital setting.4 Approximately 2-7% CADR are severe.6 In India, CADR account for 2-5% of all inpatients, while it affects 2-6% of outpatients.7

Because of the ready visibility of signs in skin, cutaneous manifestations are frequently the earliest sign of systemic drug allergy and can therefore prove critical in providing information on the severity and prognosis of the allergic reaction. Making the diagnosis of a CADR requires familiarity with the clinical patterns. This study concentrated on observing and documenting the various clinical patterns of CADR and their respective incidence in Indian patients so as to add information into the pool of scientific knowledge. This information can help pharmacovigilance centres for ensuring safe drug use and to improve quality of patient care.

No patient had history of previous episode of drug allergy to the same or similar drug. None of the cases had any history of family members with CADRs.

All of the patients had taken drugs in one form or other for a duration ranging from 1 day to 68 days. The duration of drug intake before appearance of CADR has been shown in Table 1.

As per Hartwig Siegel (HS) scoring system, the patients were placed according to severity of symptoms in 3 groups i.e. mild, moderate and severe groups. Patients with moderate severity were most common with 49(90.7%) cases followed by 4 (7.4 %) cases in severe and only 1(1.9%) case in mild severity group (1.9%).

Morphological pattern of drug reactions in our study cases revealed FDE to be the most common presentation of CADR in 19 (35.2%)cases, out of which 3 (5.7%) were of bullous FDE. Maculopapular rash was the next common pattern present in 12 (22.2%) cases. Beside these, the following distribution was observed in our study: urticarial drug rash in 5(9.3%) cases, lichenoid drug rash in 4(7.4%) cases, exanthematous drug rash in 3(5.6%) cases, TEN in 2(3.7%)cases, purpuric drug rash in 2(3.7%) cases and 1(1.9%) case each of AGEP, erythroderma, drug induced acneiform eruptions, SJS, SDRIFE, psoriasiform drug rash and vasculitis.Figure 4 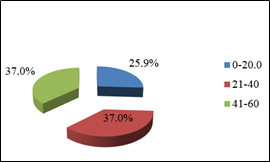 Probable causality among CADR patients based upon NP score 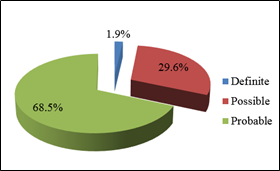 Adverse drug reactions (ADRs) place a considerable economic burden on the society. Therefore, prior to the administration of any drug, risk and benefit factors should be seriously evaluated.

History of previous drug allergy was reported in 16(29.6%) cases which was present in 22% cases in a study by Anjaneyan et al and 18.92% patients in a study by Patel et al.18 Morphological patterns of drug reaction in our study revealed fixed drug eruption to be the most common CADR i.e. 19 (35.2%) cases, out of which 3 cases were of bullous FDE. Maculopapular drug rash was present in 12(22.2%) cases being the second most common CADR in our study. The third most common lesion was urticarial drug rash in 5 (9.3%) cases and fourth being lichenoid drug rash in 4(7.4%) cases. Similar pattern has been reported in Puddukadan et al study.19

In the study by Raksha et al 15 and Sharma et al17 the commonest pattern was FDE (30.5%), followed by urticaria (18.5%) and morbilliform rash (18%). An incidence of 0.09% CADR has been established in our study as compared to 0.3% reported in Anjaneyan et al,20 3.78 % in Gohel et al,12 Low literacy rate and per capita income in our study group may be the potential cause of under reporting of cases, which may be the reason of low incidence in our study.

50% of our cases had incubation period within 1 to 7 days which was also reported in a study by Hotchandani et al 21 also. 67% of our cases had developed CADR within 3 days which has also been reported similarly in a study by Anjaneyan et al 20 (69%). In our study, 37% of patients developed CADR within 24 hours while Anjaneyan et al reported it to be 55%.20

In our study, based upon the severity by HS score, patients with moderate severity were most common with 49 (90.7%) cases followed by 4 (7.4 %) severe cases and 1(1.9%) case in mild severity group which had been reported similarly in a study by Gohel et al.12

The p value was not significantly different for AEC among mild, moderate and severe groups of CADR which is the same finding as that in study by Anjaneyan et al.20 Our study shows that the AEC is not significantly associated with severity of drug reactions which has been stated by Puddukadan et al too. 19

Since most of the patients attending the OPD of this hospital belong to relatively poor socio-economic status, the pattern of drug usage amongst them is mostly restricted to drugs that are supplied free of cost from the hospital. As a consequence, the suspect drugs were mostly from the hospital OPD supply list. This was an important limitation of this study as the suspected drug data generated from this study may not be truly reflective of the pattern in other tertiary care centres which are catering to patients of higher socio-economic status.

Duration of our study was only one year due to time constraints of research work and there was lack of long term follow up due to time bound study.

Awareness about CADR is essential for early detection and prevention. FDE and maculopapular rash are the most common CADR. Classification based upon clinical patterns of CADR can prove to be a vital cog in management because the exact pathological mechanisms behind the different CADR are yet to be ascertained. The healthcare system can promote the spontaneous reporting of dermatological ADR to Pharmacovigilance centres for ensuring safe drug use and patient care.