Meena and Soni: A clinical study of pattern of geriatric dermatosis in tertiary care hospital of Rajasthan

Introduction: Geriatric health care has received lot of attention nationwide due to increase in life expectancy over the time. Among the various health issue geriatric dermatosis are one of the most common reason for regular OPD visits. This study was done to inquest the spectrum of cutaneous manifestation and the factors responsible for causing physiological and pathological changes in the skin of elderly people.

Material and Methods: Three hundred consecutive patients aged more than 60 yrs of age attending the out patient department of dermatology at PDU Medical College & hospitals Churu were subjected for study. A detailed history was taken. A complete general, systemic & Cutaneous examination was done along with relevant investigation were carried out. Findings were collated in Performa for analysis and interpretation of data.

Conclusion: The population of 60 yrs and above is a rapidly growing dermatology clientele with both physiological and pathological manifestations. This study highlights the various dermatoses peculiar to the geriatric population and aims at sensitizing the fraternity to the specific needs of this special age group.

The human integument, comprising one-sixth of the total bodyweight, is the most visible indicator of age.1 Aging is a complex multifactorial phenomenon in which progressive intrinsic changes in the skin combine synergistically with cumulative environment insults to produce both structural and functional disturbances.2

at the epidermal-dermal junction.3 Although rarely fatal, cutaneous diseases carry with them significant morbidity and the potential to greatly decrease the patient’s quality of life.4

In India, there were 72 million elderly persons above 60 years of age as of 2001 and this number is likely to increase to 179 in 2031 and hence dermatologic care in geriatric population needs emphasis.5 This study gives an insight into different types of dermatological problems of the aged, their incidence, the various factors contributing to it and the association with systemic diseases.6

The study is cross -sectional observational study carried out on 300 patients aged 60 yrs and above attending the outpatient department of dermatology at PDU Medical college & attach group of hospitals churu were enrolled in the study after meeting the inclusion criteria of age 60 yrs and above of either sex. The exclusion criteria taken in account for the patients who did not give consent for examination. A detailed history of cutaneous complaints with comorbidity was taken. A complete general physical and systemic examination was carried out. Routine examination were carried out wherever it was necessary. Findings were collated in a master chart and results analyzed. 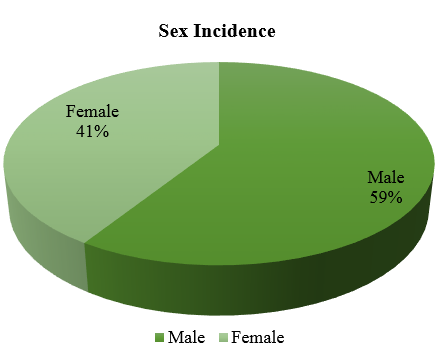 Pruritis was the commonest complaint seen in 68.5% of patients of which 15% of the patients had senile pruritis and the rest is associated with cutaneous dermatosis.

Xerosis 190(63%) were the most common physiological cutaneous manifestation seen in our study which is followed by wrinkling 74(24%). The physiological changes were described in table 1.

Among the systemic diseases diabetes (37 %) was found to have the highest incidence followed by hypertension (19%) and coronary artery diseases(19.35%) which had almost same incidence. These were tabulated in bar diagram. 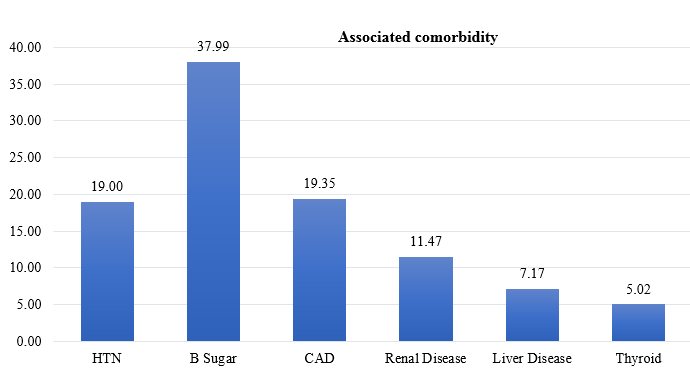 Among miscellaneous conditions urticaria were seen in 9 cases (3%). In autoimmune connective tissue disoders DLE seen in 3 cases (1%). In pigmentary disoders 2 cases (0.67%) of vitiligo was observed. Among benign tumour 28 cases (9.33%) of seborrheic keratosis were seen . No case of malignant disoder were found in our study. 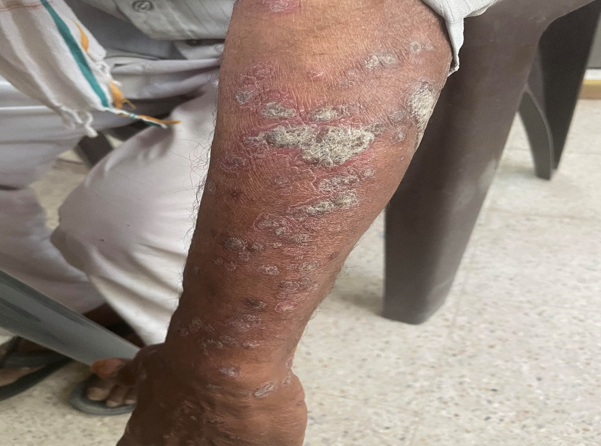 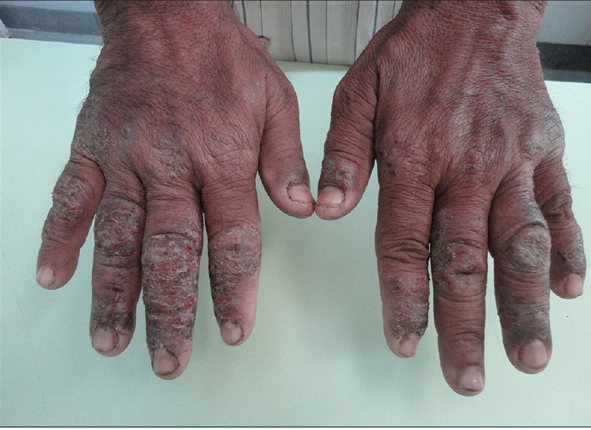 Pruritis was the commonest complaint seen in 68.5% of patients of which 15% of the patients had senile pruritis and the rest is associated with cutaneous dermatosis. Patange et al (6) noted pruritus in 78.5% of patients, of which 3.8% had senile pruritus and the rest were associated with cutaneous dermatoses (91.1%). In all the studies, pruritus has been the commones complaint noted varying from 11.5% to 54 %.5, 6, 13, 14

In our study among various comorbid conditions Diabetes Mellitus had the highest incidence of about 37%. Diabetes as the most common co-morbidity also observed in studies.6, 13, 14 Hypertension [19%] is the second most common systemic diseases seen in our study but in some studies it had the highest incidence.8, 10 In present study coronary artery diseases cases were seen in 18% of geriatric population. Such higher incidence is not observed in any study showing the increasing trend of heart diseases in older age group.

There is a very thin line in deciding what is physiological and what is pathological in older person’s skin. Many changes and lesions are normal, except occasionally in degree and number. In our study we consider Xerosis, wrinkling , senile purpura , fissured soles and idiopathic guttate hypomelanosis as physiological changes. Xerosis was the commonest physiological change seen in 190(63.33 %) patients in present study. Various studies had reported prevelance of xerosis between 7% to 99.6%.6, 7, 8, 9, 10, 13 The high incidence could be attributed due to hot and dry climate of northern rajasthan as well as less use of emollients and usage of harsher soaps . Wrinkling seen in 74. (24.67%) patients. Similar findings have been noted in other studies. Slight lower incidence of wrinkling in this study may be because of increase tolerance of racially pigmented skin Senile purpura noticed in 13 (4.33%) of patients. Studies like grover et al10 & raveendra et al8 reported higher incidence of senile purpura 10% and 15 % respectively.

Infectious dermatosis was observed in 158 (52.67%) of our study population. These results comparable with durai et al13 (46.8 %), grover et al10 (43.5%). this high incidence of infectious dermatosis in geriatric population of our study is mainly due to hot, humid climate of our place. Along with this Factors like poor hygiene, neglect, underlying disease like diabetes, bedridden status may also contribute to infections.

In our study 79(26.33%) patients were found to have eczema. These findings were comparible with durai et al (24.2%). The total incidence of eczema in various studies ranges from 13.5%6 to 58%.4 Endogenous eczema found to have higher incidence (16%) compare to exogenous eczema (10.33%). This is may be due to elderly group of patient mainly remain indoor and is not expose to the external environment. Among endogenous eczema nummular eczema had the highest incidence with 9.67% cases. In exogenous eczema contact dermatitis was observed in 4.67%. Both the findings are comparible with kshetrimayum S et al16 with 6% and 4.8% incidence respectively. Improper hygiene and decrease immunity are the precipitating factors for endogenous eczema. Moreover extreme hot climate, use of harsh soaps and lack of use of emmolients worsen the condition .

Papulosquamous disoders constituted (7%) in the study population out of which psoriasis was common and found in (4.33%) of study population. The incidence of papulosquamous disoders in present study is in concordance with the study of goyal et al17 with incidence 4 %. In our study erythroderma is found in 8(2.67%) cases which is comparible with study of Chopra A et al.18

Among benign skin tumour seborrheic keratosis was the most common type seen in 28 cases (9.33%). However the incidence observed in our study is much lower as compared to other studies with incidence ranging from 23.3 % to 56%.15, 9, 10, 8 No malignant condition were noted in this study. It is similar to the study by leena raveendra. This could be because of the lower incidence of skin cancers in racially pigmented skin.

In our study among autoimmune connective tissue disoders 3 cases (1%) of discoid lupus erythematosus were seen which is similar to Agrawal et al.19

Pigmentary disoder were observed in 12 patients (4%) of study population out of which idiopathic guttate hypomelanosis being the commonest seen in 10(3.33%) cases. Sahoo et al 14 found IGH in (6.5%) cases.

Due to increase in life expectancy india had thus acquired the label of “an aging nation “ with 7.7% of its population being more than 60 yrs and old20 The geriatric population is afflicted with a great many dermatology concerns , not only because of normal ageing process but the additional stressors acquired from the environment. A proper knowledge of the physiological and pathological skin changes in the elderly may aid the dermatologist in the better management of the cases and also help in controlling the extrinsic factors, which will be helpful in prevention of diseases in elderly .