Introduction: Verrucae or Warts are the viral infection of skin and mucosae caused by Human Papilloma Virus (HPV). Destructive modalities are the mainstay of treatment. They can have their own shortcomings like pain, infection, scarring and recurrence. To overcome these, immunotherapy is the emerging modality.

Aims and Objectives: To study the relative efficacy and safety of intralesional Measles Mumps Rubella (MMR) vaccine and intralesional Vitamin D in the treatment of multiple and recalcitrant verruca vulgaris.

Materials and Methods: 50 patients with multiple (>5) and recalcitrant warts were enrolled and divided randomly into two groups (Group A and Group B): In Group A, 25 patients were injected 0.3ml MMR vaccine whereas in Group B, 25 patients were injected 0.5ml Vitamin D injection after achieving anaesthesia with 0.2ml injection Lignocaine into the largest wart at 2 weeks interval until complete clearance or for maximum of 3 injections whichever was earlier. Patients were followed up fortnightly for 12 weeks.

Conclusion: Both the immunotherapeutic treatments are safe, economic and less traumatic to the patients as compared to the destructive procedures for the treatment of warts.

Warts or verrucae are the benign epidermal proliferations of the skin or mucosae caused by viral infection with Human Papilloma Virus (HPV), a non enveloped double stranded DNA virus.1 It predominantly affects the young age group though no age group is spared. 2 Warts are a major cause of cosmetic concern. Warts are mostly asymptomatic in nature, with tendency to spontaneously regress but it can spread to contagious areas along with symptoms like itching and pain especially in plantar and periungual warts, it can persist in a few patients affecting their quality of life and causing emotional, mental and social upset. 3

Destructive methods like use of salicylic acid, trichloroacetic acid, cryotherapy, laser ablation, electrocautery and radio frequency have been the mainstay of treatment for yearsbut these are painful, with high chances of secondary infection, scarring, high recurrence rate along with inability to treat multiple warts. 4

To overcome these shortcomings, an effort to stimulate immune system against the pathogen via immunotherapy was tried with the help of various agents such as zinc sulfate, imiquimod, intralesional candida antigen, BCG vaccine, MMR vaccine, PPD, Vitamin D. 5 These act via mounting delayed type hypersensitivity response and hence production of Th1 cytokines which in turn activate cytotoxic and Natural Killer cells and thence eliminate infection. These have the added benefit of clearing distant warts along with local lesions. 6

In this present study, we attempted to evaluate the therapeutic efficacy and safety of two immunotherapeutic agents viz. intralesional MMR vaccine with that of intralesional Vitamin D in multiple and recalcitrant warts.

This prospective study included 50 patients with multiple recalcitrant warts attending the outpatient clinic of the Department of Dermatology, Government Medical College, Amritsar after the approval of the Ethics Committee.

Patients who fulfilled the following criteria were included in the study:

The following patients were not included in the study:

Group A: Under all aseptic conditions, intralesional MMR vaccine 0.3 ml using an insulin syringe was injected in the largest wart.

Group B: Under all aseptic conditions, intralesional Vitamin D 0.5ml (60,000 IU/ml) using an insulin syringe was injected in the largest wart a few minutes after injecting lignocaine 0.2ml (20ng/ml) to alleviate the pain.

The procedure was repeated in the same lesion after every two weeks till complete clearance of warts was observed or for a maximum of three treatments in both the groups. Patients were followed up fortnightly for twelve weeks. Any untoward reaction/event reported by the patient was recorded and managed accordingly. Assessment of improvement was done with grading as follows:

50 patients with multiple and recalcitrant warts were included in the study and the improvement to treatment at all follow ups was graded, compared and analyzed by using Chi-square test and SPSS-22 version of software was used, released 2013, Armonk, NY: IBM Corp The following observations were made.

The demographic details of the patients in this study i.e. age, sex, occupation, residence along with duration, number and size of warts are as highlighted in Table 1.

On comparing improvement in both the groups, although clinical improvement was marginally more in case of Group A patients, it was not statistically significant (Figure 5).

Showing Grade IV improvement in the patient who received intralesional MMR; a: At baseline; b: At 12 weeks.

Showing Grade IV improvement in the patient who received intralesional MMR; a: At baseline; b: At 12 weeks. 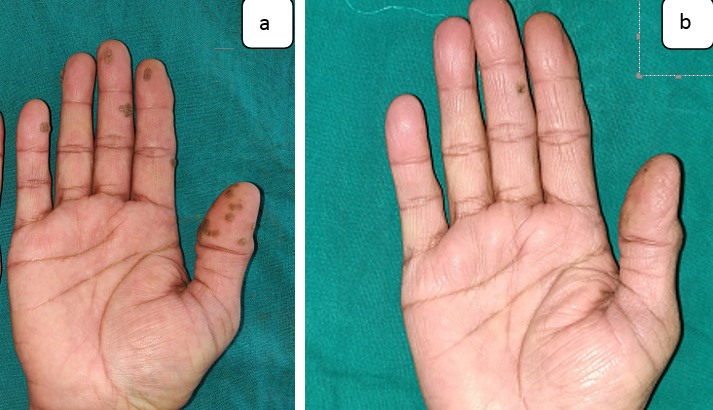 Showing Grade IV improvement in the patient who received intralesional Vitamin D; a: At baseline; b: At 12 weeks.

Showing Grade IV improvement in the patient who received intralesional Vitamin D; a: At baseline; b: At 12 weeks. 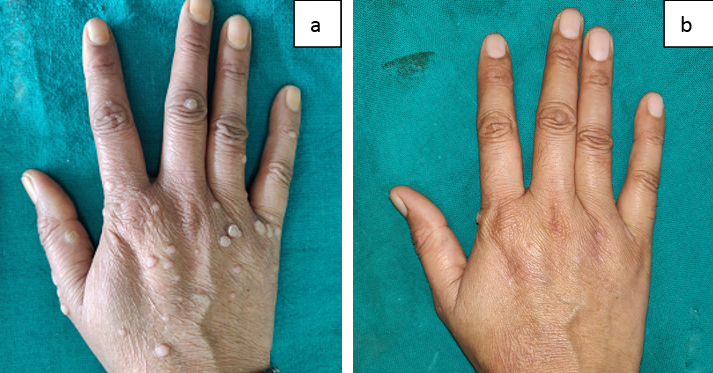 Showing comparison in improvement in both the groups at end of study i.e. 12 weeks 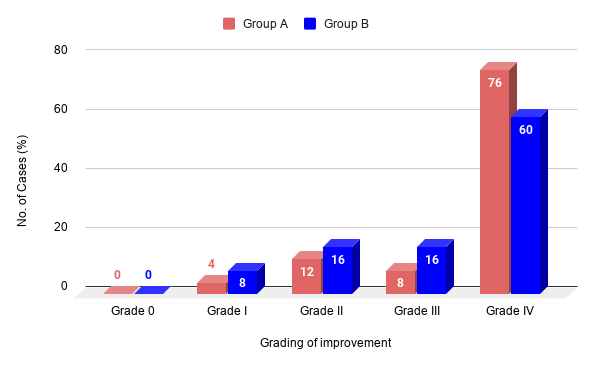 Demographic details of the patients in the study

Grading of improvement at sixth visit (At 12 weeks)

Complications in Group A and Group B

Warts are notorious for their unpredictable course and they are as likely to spontaneously regress as they are to persist. Recurrence and resistance to therapy further adds to the agony of patients and physicians. There is no end to the ongoing search for a definitive cure of wart regardless of the presence of diverse therapeutic choices which also have side effects, though mild these can’t be ignored. Thus strengthening the need of newer treatment modalities. Immunotherapy is such emerging modality which clears local as well as distant warts by increasing immune response against the pathogen. A number of antigens have been tried by researchers and in this present study, two such options are being evaluated.

In our study, in Group A, Grade IV improvement was noted in 76% patients while Grade III, Grade II and Grade I improvement was noted in 8%, 12% and 4% patients respectively. Findings in our study are consistent with other studies. Gamil et al (2010) studied 40 patients with plantar warts and injected MMR vaccine into the largest wart at 3-week intervals until complete clearance or maximum of 3 treatments. Complete clearance of the warts was reported in 87%, partial response in 4.3% and no response in 8.7%. Similar results were reported by Nofal and Nofal (2010), 7 Mohamad et al (2013)8 and Naseem and Aamir (2013)9 who reported complete response in 80%, 82% and 81.3% patients respectively whereas Na et al (2014) reported complete response in only 51.5% patients.10

Mechanism of intralesional injection of antigens may induce a potent nonspecific inflammatory response toward the cells which are infected by HPV. It has also been postulated that the trauma itself may lead to resolution of the wart in individuals with prior sensitization. It has been postulated to be related to the release of variable cytokines like TNF-α, INF-γ, IL-2, IL-4, IL-5, and IL-8.15

The effect of Vitamin D on warts was speculated to be derived from its potential to regulate epidermal cell proliferation as well as it’s differentiation and modulate cytokine production. In addition, Toll like receptor activation of human macrophage upregulate the expression of Vitamin D receptor and Vitamin D hydroxylase genes, leading to expression and secretion of antimicrobial peptides.24

In the present study, patients reported only mild complications i.e. all patients developed pain, while a notable number developed swelling at site and a few patients developed erythema at the site. Aktaş et al17 reported that only patient complaints were of minimal to moderate pain during injection. But in Kavya et al18 study, all side effects were minor and swelling was reported in 78.57% and also depigmentation in one patient.

Both the immunotherapeutic treatments are safe, economic and less traumatic to the patients as compared to the destructive procedures. Both therapies have shown similar efficacy however clinical improvement was marginally more in case of intralesional MMR vaccine injection than the intralesional Vitamin D injection as well as ease with which the injection can be given in a busy outpatient department favours the former.

The limitations of our study were that firstly the sample size was small. Secondly, the patients with complete response were not graded separately. Also only patients with verruca vulgaris were included in the study and other types of warts were excluded from the study. Due to time constraints the follow up period of 12 weeks was short but since resolution or improvement can occur even after 12 weeks. Further studies consisting of a larger number of patients who should be followed up for longer periods of time to arrive at concrete conclusions regarding the efficacy and safety of these two modalities are suggested.

NS Mohamad F Badran E Yakout Evaluation of the efficacy of a combination – measles, mumps and rubella vaccine in the treatment of plantar wartsOur Dermatol Online201344463710.7241/ourd.20134.118