Indelible ink dermatitis during COVID: A series of 97 cases

Indelible ink is formulated by National Physical Laboratory and produced by Mysore Paints and Varnishes Limited since 1962. It is most used to prevent voter fraud in elections. The ink’s believed to be composed of silver nitrate (7%–25%), which binds to the proteins in skin and nails. The ink is said to be relatively safe at this concentration. However, frequent exposure, older ink, and higher concentrations can result in cumulative exposure and various degrees of damage. Herein, we report irritation reactions with the ink in several students labelled for home quarantine during COVD19 pandemic. Overall, 97 students (aged 15–17 years) with travel history were screened and quarantined according to COVID19 protocols. They were stamped with “HOME QUARANTINE” on the ventral aspect of the right forearm. Approximately 4-6 hours later, all students complained of localised burning and swelling to a variable extent. The severity was more in girls. They were treated with topical antibiotics, steroids and cetirizine tablets which showed symptomatic improvement. Irritation with indelible ink has rarely been reported, especially, with a large sample size. This report highlights the risk of severe irritant dermatitis with indelible ink and hence the need for its judicious use.

Indelible ink, popularly known as “voter’s ink” or “election ink” has been a part of the electoral process in India and many other countries such as Afghanistan, Malaysia, Cambodia and many more. Routinely used to prevent voter fraud and malpractices, the ink is also used in Pulse polio immunisation programme to ascertain the vaccine coverage and in surgical skin marking of cancer-affected areas of the body.1, 2 In the early phase of lockdown, due to COVID-19 pandemic, the ink was also used to mark and identify interstate travellers/ contacts/ cases for home quarantine. 3

The ink has been claimed to be dermatologically safe with no adverse effects. However herein, we report an incident of 97 individuals developing varied degrees of irritant reaction secondary to stamping with indelible ink.

In our report, we included 97 students (age,15-17; males, 60) with interstate travel history who were the only ones allotted this centre for screening and quarantine purposes according to COVID-19 pandemic protocols of the state. As a part of which, they were all stamped with a “HOME QUARANTINE” (4 x 8 cm) seal on the ventral aspect of the forearm at the same centre [Figure 1]. The ink samples were evaluated for expiry and shelf life by the concerned authorities as per the protocol. For stamping, the ink was poured directly onto the seal and subsequently stamped for approximately 6-8 students. This was repeated to cover all the students. There was no immediate adverse reaction on skin reported.

The following day, approximately 4 to 6 hours after stamping, all the 97(100%) students complained of burning sensation and swelling at the site of stamping. On evaluation we noted the varied degree of erythema, oedema, bullae and superficial erosions over the sites corresponding to the letters and borders of the seal [Figure 2 to 4]. Similar lesions were also noted on the areas of excess ink dripping over [Figure 5]. We also observed a more severe irritant reaction among girls compared to boys. Students who were stamped immediately after pouring on ink had more aggressive reaction than others. None had any systemic complaints post stamping. 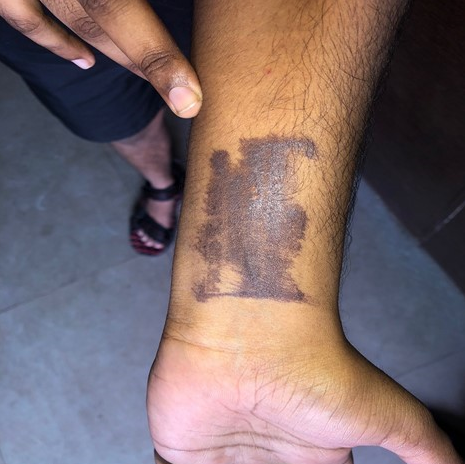 Superficial erosions corresponding to the letters of the seal. 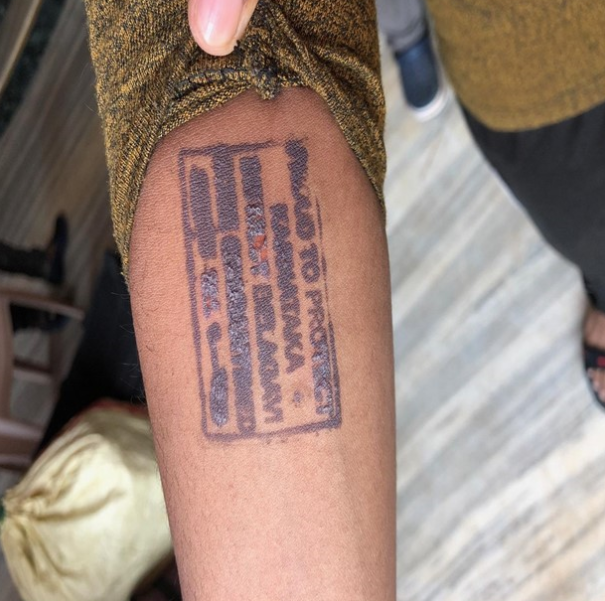 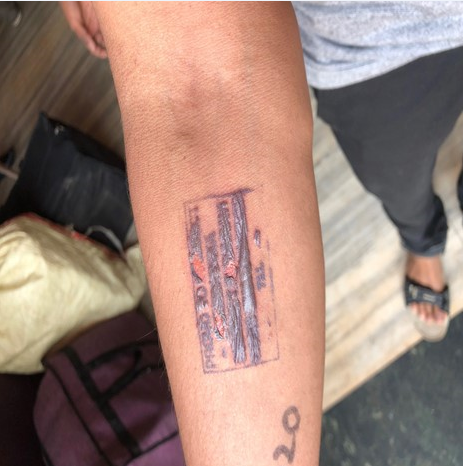 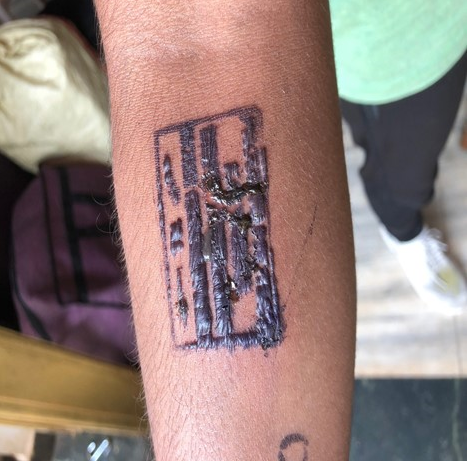 Irritant reaction noted along the areas of ink spillage. 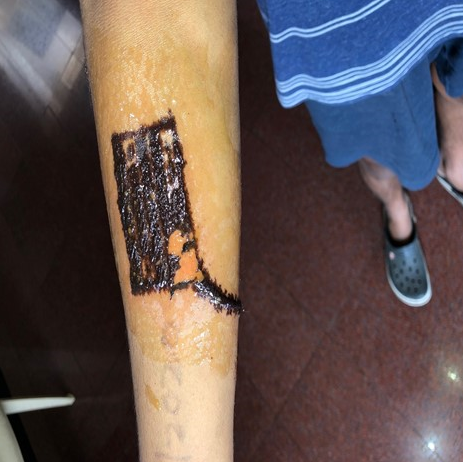 All of them were prescribed topical antibiotics, steroids and oral cetirizine. There was symptomatic improvement in the lesions. The requirements for ethics committee approval and informed consent were waived due to the observational retrospective nature of the report.

The term irritant contact dermatitis denotes an inflammatory condition of skin and mucous membrane resulting from activation of innate immunity by direct cytotoxicity of a chemical or a physical agent.4

In its acute phase, there can be burning, stinging and soreness at affected areas. Physical signs like erythema, oedema, bullae and necrosis can be seen. The lesions are limited to the area of contact with irritant and with well demarcated borders.5 Pathologically, it begins with penetration of irritant through stratum corneum, damage to keratinocyte, release of inflammatory mediators and T-cell activation.6 In chronic phase, with already disrupted barrier function, there is desquamation and increased trans-epidermal water loss.

The indelible ink apart from being used in the electoral process, was also used in a study to determine rate of nail growth.7 Quite recently it was also approved by Indian Election Commission to be used for stamping home quarantine individuals.

Formulated by the National Physical Laboratory of India, this semi-permanent ink is solely produced by Mysore Paints and Varnishes Ltd since 1962. Although the exact composition of the ink is a closely kept secret, it is said to contain 7-25% silver nitrate as a main ingredient.8 Silver nitrate binds to protein component of the skin making it difficult to wash off and stays on for around 2 to 3 weeks. 9

Although at this concentration it is supposed to be safe on skin, increased cumulative exposure (older ink, frequent exposure, higher concentration at site) can cause varied degrees of damage as reported by Mishra et al.1 Similar case of irritant dermatitis were reported in Odisha.10

In our observations, there was a more severe irritant reaction in individuals who had excess ink spillage compared to the ones who were stamped in the later part of each cycle. Thus, highlighting the role of exposure to higher amounts of ink. This also explains the absence of such reaction when routinely applied using a brush for marking the nails during the election process.

Since its invention, indelible ink has been a crucial part of the Indian electoral process. Although it is used since ages for marking the nails, quite recently was used in stamping interstate travellers for home quarantine. There have not been many reports mentioning the irritant reaction caused by the ink so far, less so with such large subjects. This study highlights the capability of the indelible ink in causing severe irritant reaction on application to skin. This also calls for much more judicial use of it and need for more detailed studies analysing the effect of the ink on skin.

The authors declare that they have no conflict of interest.

The science of indelible ink2021https://www.livemint.com/science/news/the-science-of-indelible-ink-1556023764108.html