Among Nonmelanoma skin cancers the commonest is Basal cell carcinoma.1 It comprises of 80% non-melanoma cancers. This disorder is more common in whites and it is a slow growing, locally invasive tumour occurring with greatest frequency among the Caucasian and elderly populations.2

65 year old female came with complaints of pigmented raised lesion over her left thigh region for the past 3 years. There was history of waxing & waning of the lesion. No history of any presdiposing factors such as radiation burns, immunocompromised status, arsenic exposure. No significant family history On Examination pigmented hyerkeratotic plaque was present which was raised at one end & atrophic at the other end as shown in [Figure 1]. Clinically it mimicked lupus vulgaris which has the characteristic atrophy at one end & progression at other end so we further evaluated the lesion for histopathological examination which showed features suggestive of Basal cell carcinoma [Figure 2 A,B,C,D]. Histopathological findings are characteristic peritumoral retraction artifact with mucin deposition around the tumor, peripheral palisading of cells with central horn pearl. There was no lymph node involvement. She was classified as T1N0M0 stage in TNM classification of Basal cell carcinoma. Patient was started on topical 5 -fluorouracil 5% & cryotherapy. 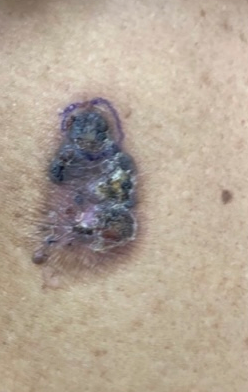 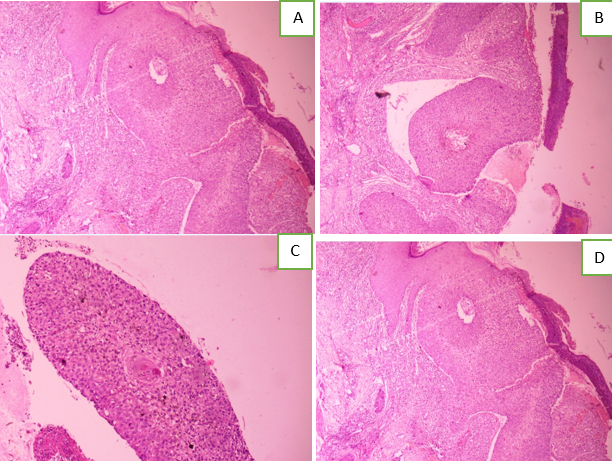 Jacob Arthur first described bcc in 1827. 3 It mainly occurs in head & neck region as a slow growing lesion in sun exposed areas. Basal cell carcinomas are the most common cutaneous tumors, accounting for approximately 80% of all malignant diseases of the skin.It mainly affects white skinned individuals. It is characterized by almost a total absence of metastasis less than 0.01% cases.4 Usually it is caused by a combination of cumulative ultraviolet (UV) exposure. However, occurrence of Uncommonly, Basal cell carcinoma may develop over atypical locations such as axilla, nipple, scrotum, pubis, and perianal region5, 6 in our case its thigh region. The clinical variants are nodular (most common), pigmented, morpheaform, superficial, and fibroepithelioma of pinkus. Some may manifest as nodules, patches, plaques, ulcers.Histological variants are many they are nodular, micronodular, morpheaform, adamantoid, adenoid, basosquamous, cystic, keratotic, matricial, giant cell type etc. Treatment for Basal cell carcinoma involves electrodessication and curettage (EDC), excision, cryosurgery, and Mohs micrographic surgery. Localized Basal cell carcinoma has high 5-year cure rates generally over 95 percent7 Basal cell carcinoma is generally a slow-growing tumor for which metastases is rare, occurring in only 0.5 percent or less of cases. Lupus vulgaris is a paucibacillary form of cutaneous tuberculosis (TB) spread by endogenous as well as exogenous routes occurring in a person with moderate or high-degree of immunity8 In the region like Indian subcontinent and South Africa the most common form of cutaneous TB in adults is Basal cell carcinoma.9 Skin type 1, blue or sometimes even green eyes, childhood freckling, childhood sunburn, family history of skin cancer, Blonde hair, immunosuppressive treatment and arsenic ingestion are considered to be the risk factors of Basal cell carcinoma. In this case we kept clinical differential diagnosis of lupus vulgaris seeing the morphology of the lesions but histopathology showed classical features of Basal cell carcinoma. The incidence of all varieties of skin cancers is lower among Indians due to the protective effects of melanin. Various studies from India consistently report SCC to be the most prevalent skin malignancy. 10 However we shouldn’t overlook Basal cell carcinoma & a proper histopathological evaluation in pigmented raised lesions over sun exposed area is essential to rule out the possibility of Basal cell carcinoma, especially in old age .

A rare presentation of Basal cell carcinoma along with uniqueness in the site prompted us to report the case. Our report highlights the noteworthiness of taking into consideration of the diagnostic dilemma of bcc masquerading as lupus vulgaris .