Ring within a ring appearance: A confounding manifestation of erythema annulare centrifugum

Erythema annulare centrifugum is one of the figurate erythemas which clinically presents by annular, polycylic, erythematous plaques which is characterized by scaling behind the progressing edge. It is considered to be a hypersensitivity reaction to an antigen. Various etiological factors like cutaneous or systemic infections, drugs, malignancy, pregnancy are considered. Hereby we report a case of erythema annulare centrifugum which was treated for long period of time considering to be a dermatophytosis. This report highlights the need to be vigilant for diagnosing this condition in patients presenting with erythematous annular plaques.

Erythema annulare centrifugum (EAC) is one of the reactive erythemas described first by Darier in 1916. 1 It is an inflammatory condition which is characterized by annular erythematous eruptions which progresses centrifugally leaving behind central clearing. Primary goal is to find out the primary underlined cause of the disease. In this particular case, importance of vigilance for diagnosing EAC is highlighted, as this case was diagnosed as dermatophytosis in outside hospital and later diagnosed as cutaneous larva migrans, but no response to albendazole treatment raised a suspicion of EAC which was later confirmed histopathologically and treated accordingly.

A 36 year-old male patient came to dermatology outpatient department with a chief complaints of 3 red elevated localized lesions over his chest since 2 months. Lesions were totally asymptomatic. Lesions were progressing centrifugally gradually with leaving an area of central clearing. No history of similar lesions elsewhere on the body was present. No history of similar lesions in the past was present. There was no history of any drug intake prior to the onset of the lesions. No history of any cutaneous or systemic infections in recent past was present. No history of sudden weight loss and loss of appetite was present. History of no response to antifungal treatment for past 2 months for the same lesion in other hospital. Patient was not a known case of Diabetes mellitus, hypertension or any other comorbidity. On examination, there were three annular erythematous lesions present on the chest of varying sizes (Figure 1) There was presence of central clearing with ring within a ring appearance. (Figure 2) No similar lesions were seen elsewhere on the body. Biopsy was taken from the advancing edge of the lesion which showed, mild hyperkeratosis, spongiosis, perivascular mononuclear cells infiltrate in upper dermis. (Figure 3, Figure 4). Skin scrapping for fungus for KOH mount came out to be negative. Patient was first diagnosed as cutaneous larva migrans, but due to lack of response to albendazole treatment, suspicion of EAC was made. Patient was then further investigated. Complete blood count, renal and liver function tests, blood sugar level, thyroid function test were within normal limits. X-ray chest, ultrasonography of abdomen were normal. On the basis of clinical presentations and after ruling out other possibilities, diagnosis of EAC was made. Patient was started on topical tacrolimus. 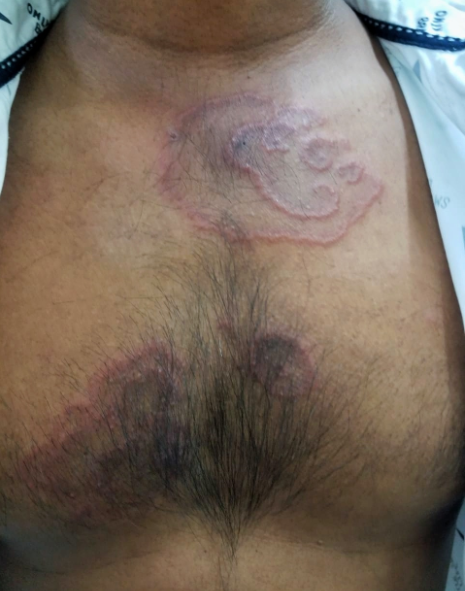 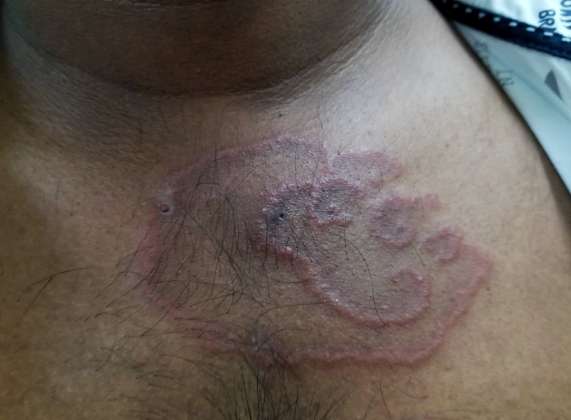 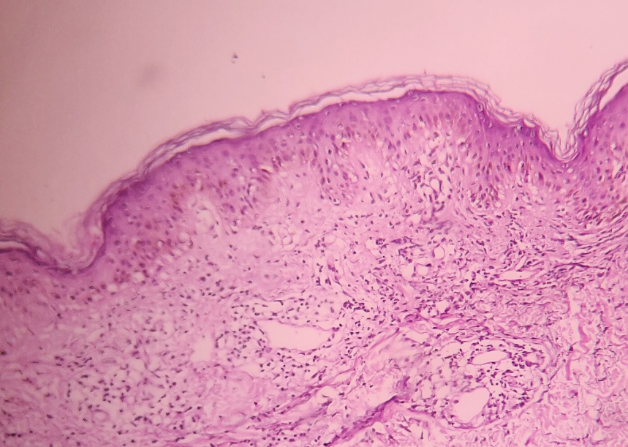 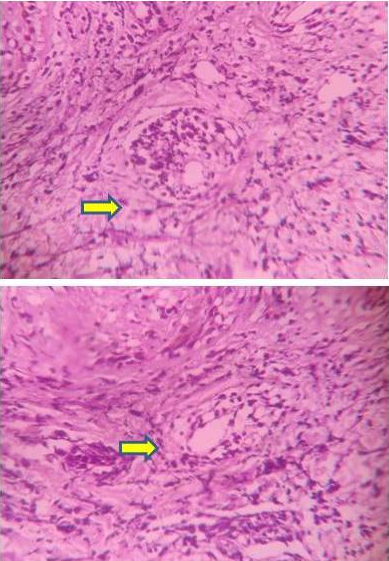 Erythema annulare centrifugum is the most common gyrate erythema seen usually in adults and rarely in children and newborns.2 It represents hypersensitivity reaction presenting as arcuate and polycyclic areas of erythemas. These lesions progress centrifugally with a rate of 1 to 3 mm per day.3 Usually lesions do not progress beyond 10 cm. Peripheral progression of the lesions reflect localized production of proinflammatory cytokines and vasoactive peptides. It is usually asymptomatic but in few cases pruritus may be present. The condition is classified into superficial and deep variants. Famallial type of EAC is also reported. Superficial EAC presents with classical trailing scale which is, a delicate annular scaling which trails behind the progressing edge of the lesion. Deep variant of EAC is characterized by annular areas of palpable erythema with central clearing and nil surface changes. Surface of all variants of EAC are without any crusts or vesicles but, in atypical cases, telangiectasia and purpura have been reported.4 Mucosa is usually spared. Many cases present with waxing and waning and can be recurrent over months to years. But, most of the cases are self limiting to 6 to 8 weeks provided primary etiology is taken care of. Etiological factors for EAC include drugs like salicylates, penicillin, antimalarials thiazide group of drugs, amitryptiline, rituximab. fungal infections including dermatophytosis andcandida infection, pseudomonas infection, viral infections by pox virus, Epstein barr virus, Varicella zoster virus, HIV. Few systemic disorders like Crohn’s disease, hypereosinophillic syndrome, autoimmune endocrinopathies can also give rise to EAC. Various malignancies like lymphomas, leukemias, breast cancer also lead to EAC which is also called as PEACE (Paraneoplastic Erythema Annulare Centrifugum Erruption).5

Diagnosis is mainly done on the basis of clinical presentation. Histopathological examination helps in differentiating other conditions with annular lesions. Other investigative studies are done to find out associated underlying primary disorder. Histopathologically, EAC shows, presence of dense perivascular infiltrate composed of lymphocytes, histiocytes which characteristically called as “coat-sleeve” pattern. In superficial type, there are more of epidermal changes like parakeratosis, hyperkeratosis, spongiosis with our without vacuolar degeneration. Deep variant is characterized by nil epidermal changed with perivascular infiltrates in upper and lower dermis.6

Erythema annulare centrifugum is considered to be a reaction pattern. Most of the times, lesions being asymptomatic, it can be ignored by the patients. Clinicians ought to be vigilant for diagnosing this condition as it gives a clue for some underlined primary disorders including malignancies. Primary goal should be to treat the underlined condition in earlier stages to avoid probable consequences.