Physical urticaria is a diverse group of determinable conditions in which patients suffer from a chronic predisposition to develop localized or generalized urticaria upon contact with physical stimuli. Mechanical, thermal or electromagnetic stimuli can produce these responses. It accounts for nearly 20% to 30% of cases of chronic urticaria.1

Current method for diagnosis of dermographism and its limitation

Conventionally, the diagnosis is made by stroking the skin with a wooden tongue blade 2 or a ballpoint pen with an empty refill.1 Use of ballpoint pen with empty refill is associated with some limitations in clinical practice. The length of the tip of ballpoint pen is fixed. Hence, the intensity of the stroke produced can be variable. Moreover, with traditional single stroke, there is chance of missing the diagnosis.1 Estimation of provocation threshold i.e. the lowest level of shear force required to produce a positive wheal response is difficult with instruments with single tips/arms. The other methods to diagnose symptomatic dermographism include Dermographic tester, a spring-loaded dermographometer and Fric Test.3 Dermographic tester also has only one tip5 whereas Fric Test dermographometer is not available in India.6

Considering the limitation of current method, a user friendly, simple but inexpensive method of eliciting dermographism is required.

We propose a novel instrument, known as the skin writometer for eliciting dermographism. This can be used for diagnosis as well as evaluation of treatment response to dermographism/symptomatic urticaria.

This plastic instrument has 3 smooth arms of varying lengths i.e. 2.5 mm, 3.0 and 4 mms placed 2 cm apart. These arms can be used to strike on the skin in patients of urticaria. [Figure 1] 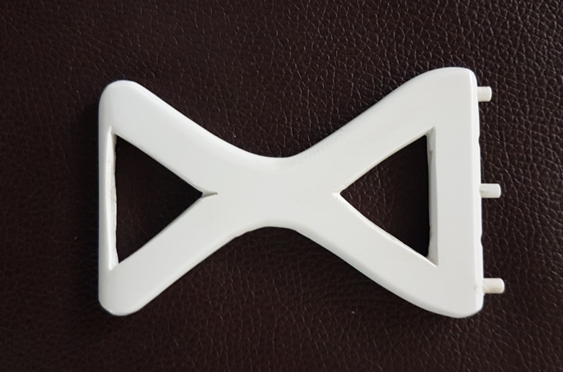 Interpretation of the response

Skin writometer has been suggested by others as an alternative option to Fric Test. 7 Although found useful in clinical practice, a formal evaluation through a clinical study is needed to assess its usefulness compared ballpoint pen test.

The suggested approach for conducting clinical investigation may include giving a firm stroke of ~10 cm with the help of a ballpoint pen on one arm and same stroke with Skin writometer on the other arm. The extent of wheals can be measured on both the sides after 10 minutes. The sensitivity and specificity of Skin writometer in identification and diagnosis of symptomatic dermographism can be compared. Similar approach can be used for comparison with the Fric Test.

Skin writometer, may be used as a simple, user friendly and inexpensive instrument for accurate diagnosis of symptomatic dermographism.