Waghralkar and Jhunjhunwala: Observational case studies of the effect of phage laden Ganga water on psoriasis

Water of Ganga river is reported to have more than 200 isolates of phages. This study has used the naturally available cocktail of phages in the Ganga water as a treatment for chronic Psoriasis. In the conventional Phage Therapy (PT) phages that are active against specific bacteria are first identified; then isolated, multiplied and administered to the patient. We have made a novel innovation of administering the naturally available cocktail of phages in the water of the Ganga river without first identifying the target bacteria and isolating specific phages that may be active against them. In doing so, we enable the large numbers of phages to self-identify the bacteria that are present and act against them. This approach shortcuts the tortuous process of conventional PT. Further, the phages act against a number of bacteria simultaneously and provide good results in psoriasis which has multiple causes.

Patients who took Ganga water for only 2 weeks showed benefit but the benefit did not sustain after stoppage of the treatment and the disease relapsed to the pre-treatment levels. The same patients showed sustained benefit after they took Ganga water for four weeks. Conclusion is that Ganga water can be used for therapeutic purposes as long as the treatment is continued for at least four weeks. The study underscores the need to establish more robust protocol for treatment of dermatological and possibly other diseases with the cocktail of phages available in the waters of the Ganga river.

PT has been used to treat a number of bacterial infections such as from Pseudomonas Aeruginosa,4, 5, 6, 7, 8 Staphylococcus Aureus,5, 6, 7 Acinetobacter, 6, 7 Enterobacteriaceae,6 Escherichia,8 Klebsiella, 7 and Streptococcus.8 Normally PT uses specific phages to treat specific bacterial infections. However, in the case of dermatological disorders, where possibly a number of bacterial infections are required to be simultaneously treated, a cocktail of phages could be more effective. The use of a cocktail of phages have been made to simultaneously target S. aureus, S. pyogenes, P. mirabilis, P. vulgaris, P. aeruginosa, and E. coli was used.8 The use of a cocktail is also preferred because the chances of emergence of phage resistance are reduced. 6

The established method of making a cocktail of phages is to first isolate a number of phages, multiply them, mix them and then administer them to the patient.9, 10 This process is expensive and faces the problem of maintaining stability of phages in the cocktail.8 We make a novel advance of administering the naturally available cocktail of phages in the Ganga river. The National Environment Engineering Research Institute, Nagpur has undertaken detailed survey of the presence of phages in the Ganga river. They have found that the water of the upper Ganga river contained more than 200 isolates of phages.11 More specifically, they have reported that phages having bactericidal activity against Mycobacterium, Streptococcus, Pseudomonas, Yersinia, Salmonella, Staphylococcus, Klebsiella, Vibrio, Shigella, Clostridium, Acinetobacter, Erwinia, Aeromonas, Escherichia, Cronobacter, Enterobacteria, and Campylobacter etc. are found in the Ganga waters. This unparalleled availability of large number of isolates gave us the reason to try treating chronic Psoriasis patients by cocktail phage therapy.

Psoriasis comes under papulosquamous disorder with a morphological feature of scaly papules and plaques. Psoriasis is an autoimmune disorder of the skin results in hyper proliferation of the skin. The itch scraping causes multiple bleeding points. Psoriatic lesions are distributed symmetrically on scalp, elbow, knees, lumbo-sacral area and in folds of body. Genetic factors play important role in its aetiology. There is a 7 percent chance that a person will contract psoriasis if one parent has psoriasis; and chances are 14 percent if both parents have psoriasis.

Type 1 psoriasis occurs at or before the age of 40 and seen in 75% of patients. Type II Psoriasis presents after the age of 40, with a peak at 55-60 years of age. The course of disease is chronic though periods of complete remission do occur. This is further divided to 3 subtypes. Acute form is characterized by small eruption and is accompanied by slight itching. This form is characteristic of psoriasis in childhood and young adults. Chronic plaque psoriasis with guttate exacerbation is seen in adults wide spread small plaque (< 3 cm) psoriasis. Nail psoriasis has been reported 40-50% of psoriatic patients.

The water of Ganga river upstream of Rudra Prayag, from where we have collected the same, has Dissolved Oxygen as 9.6 mg/liter and Biological Oxygen Demand at 1.2 mg/liter as per Government Reports. These levels meet the water quality standards for drinking water. The pH is reported to be between 6.5 to 8.5 which too meets the drinking water quality standards. However, the water had coliforms at 9300 per 100 ml against the requirement of less than 50 for drinking water.12 We tested the water after one month of storage and found that the phages adsorbed in the sediments had cleared the overlaying column of water of coliforms indicating that the water was fit for drinking.

The protocol for intake was as follows:

The 1st phase of administration of Ganga water was 2 weeks followed by rest period of 2 weeks.

The 2nd phase of administration was 1 month followed by rest period of 1 month.

All patients having psoriasis were selected for the study.

The study size was determined by the number of psoriasis patients that came to the physician for treatment.

The result was scored on 1 to 10 Likert scale as assessed by the medical practitioner to assess the results, 13, 14 with “5” and less representing a “morbid” situation, and “10” representing best situation.

The results were recorded at 5 points of time:

Results at four phases (All figures of “level” n Likert Scale of 1-10). 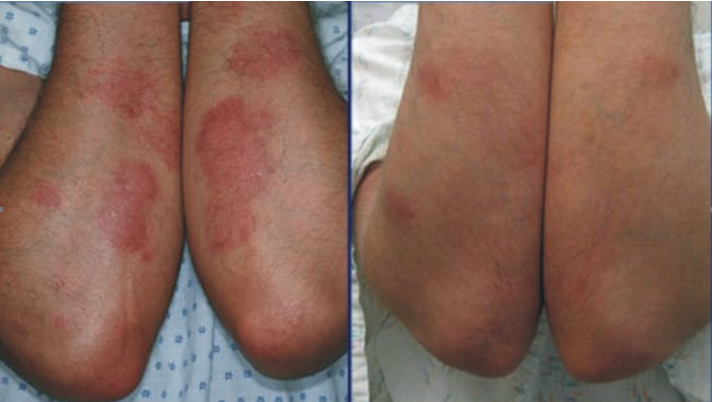 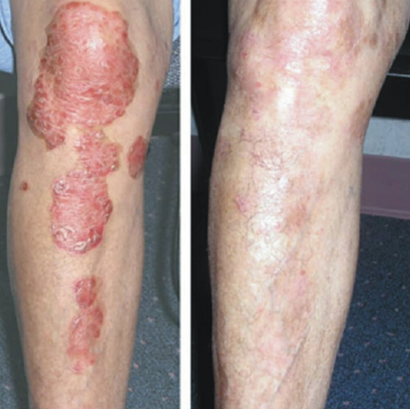 Phase I, Administered: Ganga water was administered. Change before and after administration was recorded.

Phase II, Rest: Ganga water was stopped and change at the end of the rest was recorded.

Phase III, Administered: Ganga water was administered. Change at the end of administration was recorded.

We present the results both in average and median. Average is calculated by summing the values and dividing by the numbers of observations. This is sensitive to one or few observations showing high numbers. Thus, median is considered to be more robust.15

Limitations of the study are as follows. One, the confounding effect of normal prescription medicines cannot be precluded though it is not likely because the patients had been suffering from psoriasis for 2 years or more and had been taking the prescription medicines. Two, the sample size was small. However, oftentimes an experimental treatment can open up new vistas.16 Three, only one protocol was adopted. It is necessary to try different protocols and arrive at the most robust protocol. Four, at the end of Phase IV, four patients reported improvement to level 4-6 while four reported improvement to level 1-3. A longer treatment period needs to be tried to ascertain if greater improvement is obtained.

A limitation of the study is that the exact numbers and species of phages are not identified. Therefore, it is possible that water taken from the Ganga river at another place and time may have a different combination of phages that may or may not be effective for treatment.

Conclusion is that Ganga water therapy holds much potential for the treatment of psoriasis if the treatment is made for minimum four weeks.

JD Cook Example of efficiency for mean vs. median2009http://www.johndcook.com/blog/2009/03/06/student-t-distribution-mean-median/