Akshay, Belliappa, and Leena: Subcutaneous fat necrosis of newborn - A rare case report of lobular panniculitis in a neonate

Subcutaneous fat necrosis of newborn is a rare cutaneous disorder affecting neonates. It usually presents as subcutaneous nodules or plaques, within the first few weeks of life, following an eventful delivery. It is characterized by hypercalcemia, which may present with lethargy, irritability, hypotonia and dehydration, mimicking sepsis. Histopathology is proven to be the gold standard in diagnosis with characteristic lobular panniculitis, mixed inflammatory cell infiltrate and radially arranged crystals. This needs to be differentiated from other causes of lobular panniculitis, as early diagnosis and treatment to prevent long‑term complications are advocated. Education of parents regarding the disease and danger signs of hypercalcemia and weekly monitoring of serum calcium is recommended. Treatment based on rehydration, dietary vitamin D and calcium restriction, Furosemide and prednisolone are considered. We have discussed a case of subcutaneous fat necrosis, in an 8-week-old male baby.

Key Messages: Subcutaneous fat necrosis is an important differential in neonates presenting with palpable subcutaneous nodules, along with sclerema neonatorum. Severe complications like hypercalcemia should be detected early and managed aggressively to prevent morbidities and mortalities associated with it. Symptomatic management, use of calcium lowering drugs and regular monitoring of calcium levels are recommended.

Subcutaneous fat necrosis of newborn (SCFN) is an uncommon cutaneous disorder, affecting apparently healthy full-term or post‐term neonates. It usually presents within the first few weeks to months of life. Neonatal sclerematous skin was first described by Usembenzius in 1722, and the classic description was given by Underwood in 1784, who coined the term ‘skin - bound’. Fabyan in 1907, separated the nodular form (SCFN) from the bound-down brawny type sclerema neonatorum, based on morphology, histology, etiology and prognosis.1 SCFN is a rare entity with less than 130 cases reported globally.2

The characteristic presentation is well-circumscribed, indurated, tender or asymptomatic plaques/nodules with or without erythema, located at the sites where neonatal brown fat predominates, such as the upper back, thighs, buttocks, arms, and cheeks. The anterior trunk is classically spared. SCFN usually has a favorable prognosis with complete resolution of subcutaneous lesions without any intervention within several weeks or months, but it may also be complicated by severe metabolic complications like hypercalcemia, resulting in renal failure and neonatal death.3

We describe a child with SCFN with preceding perinatal asphyxia secondary to meconium aspiration. In this case, the clinical presentation, diagnosis, and management options of SCFN are discussed.

We report the case of an 8-week-old male baby who presented with multiple skin-coloured plaques and nodules all over the body. The baby was delivered by emergency caesarean section due to fetal distress and low birth weight (1520 grams) at the 37th week of gestation. Soon after birth, the baby experienced severe perinatal asphyxia secondary to meconium aspiration which required intubation and suction. Apgar scores were 2 and 8 at 1 and 5 min, respectively. Positive pressure ventilation and positive end-expiratory pressure were administered under intensive care for a week. The patient did not receive body cooling or therapeutic hypothermia. He developed an asymptomatic solitary nodule over the nape of the neck on 15th day of life, which gradually increased in size and number, spreading all over the body in a span of 4 weeks, which gradually decreased over the next 2 weeks without any intervention.

On cutaneous examination, multiple skin-coloured well-defined palpable nodules and plaques which felt like “pebbles beneath the skin” in the subcutis measuring about 1 X 1 cm to 5 X 5 cm were present predominantly over the upper back, cheeks, bilateral upper limbs and lower limbs. Lesions were non-tender and the surface was irregular. The skin over the lesions was pinchable, lesions were freely mobile and not attached to deeper structures. There was no local rise of temperature. Scalp, palmo-plantar surfaces and genitals were spared (Figure 1).

On histology, dermis showed lobular panniculitis with infiltration of lymphocytes, histiocytes, fibroblasts and multinucleated giant cells, along with necrosis of the adipocytes and its clefts containing radially arranged refractile crystals or eosinophilic strands and granules suggestive of SCFN (Figure 2). Blood investigations showed neutrophilic leukocytosis (12,000cells/mm3, N=82%), hypercalcemia (13.8 mg/dL), hypertriglyceridemia (120 mg/dL), raised urine calcium-creatinine ratio (1.304:1) with normal ultrasonography. Since the lesions were in the resolution phase, the baby was followed up for the onset of any complications. Serum calcium levels reduced to normal by 3 months

Multiple skin coloured, palpable nodules and plaques present on the arms, back, legs and cheeks (a) anterior surface (b) posterior surface 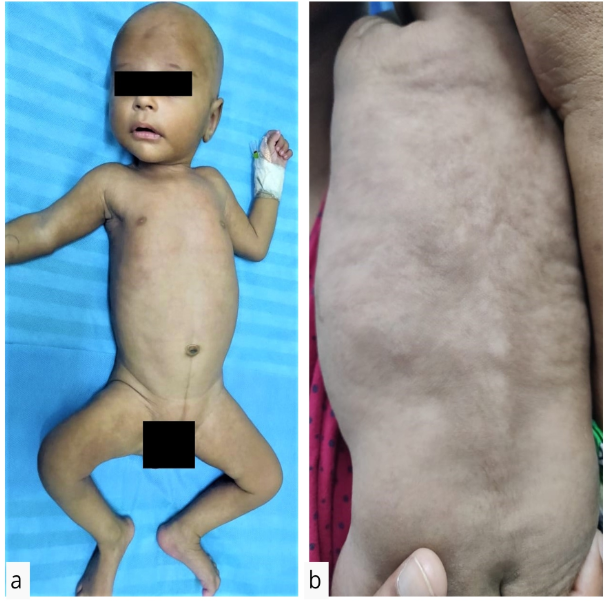 Subcutaneous fat necrosis is a rare, benign form of lobular panniculitis with the natural history of transient and spontaneously resolving lesions in several weeks to months. However, associated hypercalcemia when present can cause significant morbidity and/or mortality.

Neonatal fat is composed of saturated fatty acids (stearic and palmitic acids) with a relatively high melting point (64 °C), in contrast to unsaturated fatty acids (oleic acid, melting point of 14 °C) in adults. With hypothermia, neonatal fat may more easily undergo crystallization due to physiologic blood shunting from the skin surface and cause adipocyte necrosis and a granulomatous reaction which may present with SCFN within the first month of life.5

Differential diagnosis of subcutaneous fat necrosis of the newborn 6, 7

Histopathological features characteristically reveal lobular necrosis of the fat cells with refractile crystals (birefringence on polarized-microscopy) arranged in a radial pattern in the clefts which is also seen in sclerema neonatorum and post-steroidal panniculitis. Mixed granulomatous inflammatory cell infiltrate with calcium deposits are seen as eosinophilic granules.1, 3

Laboratory evaluation of SCFN cases is crucial, as it presents with life-threatening hypercalcemia in more than 50% of cases, usually in the recovery phase and within 6-7 weeks of age.2 The pathogenic mechanism of this condition is still not understood. It is hypothesised that elevated parathormone and prostaglandin E2 level results in bone resorption, extra-renal vitamin D (1,25(OH)2D3) synthesis, calcium dissipation from the resolving lesions and decreased renal clearance resulting in elevated calcium levels. Mild cases are asymptomatic, whereas severe cases present like sepsis.8 Observation and monitoring the clinical symptoms and serum calcium levels once a week until 6 months of age is recommended. Imaging with ultrasound, computed tomography or magnetic resonance imaging may aid in the diagnosis.9 The differential diagnosis of SCFN is discussed in Table 1.

Prognosis is excellent with spontaneous resolution. The commonly associated complications are epidermal atrophy, cutaneous ulceration, minimal scarring and nodules which may liquefy and form a fluctuant cyst requiring drainage to prevent a nidus of infection. Hypercalcemia may complicate into nephrocalcinosis, nephrolithiasis, renal failure. Calcification of falx cerebri, skin, myocardium, and gastric mucosa may also occur. Hypertriglyceridemia due to lipolysis, hypoglycemia, hyperferritinemia, lactic acidosis and transient thrombocytopenia have been reported.1, 2, 3, 4, 5

The therapeutic approach of hypercalcemia consists of hyperhydration and diet with low levels of calcium and vitamin D. Furosemide and/or systemic corticosteroid (prednisolone), bisphosphonates (e.g., etidronate) has shown promising outcomes.10

To conclude, this case highlights the need for a high index of clinical suspicion for the medical personnel, to aid in early diagnosis and appropriate intervention. Periodic follow-up is required to prevent further complications arising from hypercalcemia and therefore help in reducing morbidity or mortality from SCFN in the newborn.

We are extremely thankful to the parents of the newborn for their immense co‑operation and for allowing us to publish the case and the photograph.

N S Stefanko B A Drolet Subcutaneous fat necrosis of the newborn and associated hypercalcemia: a systematic review of the literaturePediatr Dermatol2019361243010.1111/pde.13640