Elastosis perforans serpiginous (EPS) is a rare perforating disorder characterized by trans epidermal elimination of fragmented elastic fibres. The cutaneous features include asymptomatic hyperkeratotic papules. Here we present a case of 27-year old female presented with hyperkeratotic papules with central depression arranged transversely in a serpiginous fashion on front of the laxed skin of the neck region. The histopathological features are consistent with the features of EPS on Cutis Laxa. Elastosis perforans serpiginosa in Acquired cutis laxa has not been reported very rarely, hence this case has been reported.

EPS classified in to 1. Idiopathic 2. Reactive, (with other associated connective tissue disease) 3. Induced by Pencillamine.1

Cutis laxa is a rare disorder of connective tissue, characterized by loose, pendulous and inelastic skin. 2 They present as generalized or localized form which can occur secondary to trauma or following infection.

27 years old female, presented with complaint of excessive and sagging folds of skin on front and lateral aspect of neck since 17 years complaint of black colored eruption on sagged skin on neck since 7 months. She didn’t have any chest deformities, No hyper extensibility of joints, no cardiac and ophthalmic involvement. Dermatological examination revealed hyperkeratotic papules (Figure 1) about 1-2 mm arranged in a serpiginous manner over anterior aspect of neck (Figure 2). Skin over the papules is loose, pendulous, inelastic skin extending from anterior aspect to lateral margins of neck (Figure 3, Figure 4).

Patient is a not a hypertensive. All Other systems that are commonly Involved are evaluated. Ophthalmic- cornea / Fundus- normal Cardiac vascular system-no ECG and 2D ECHO changes. X-ray of chest Revealed no emphysematous change, gastrointestinal system- normal. No hyper extensibility of joints. 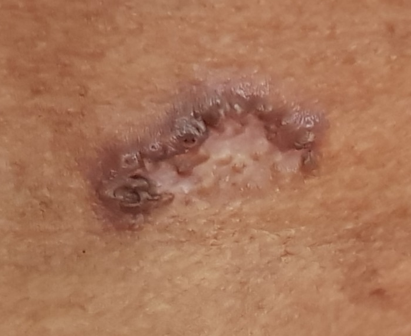 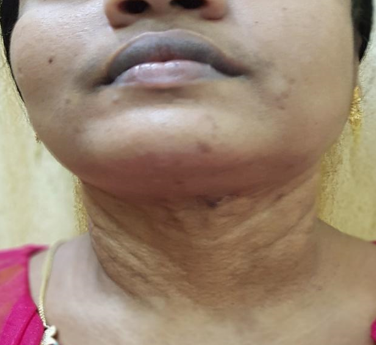 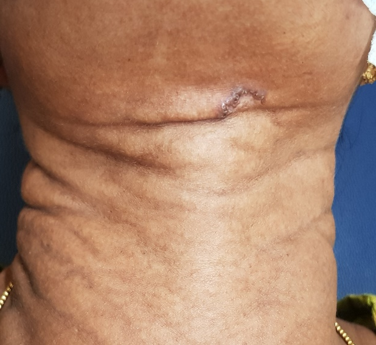 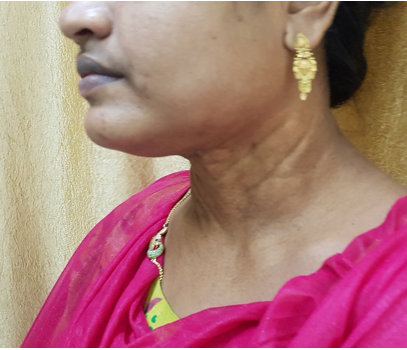 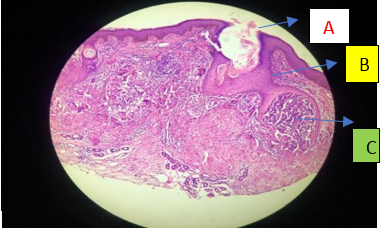 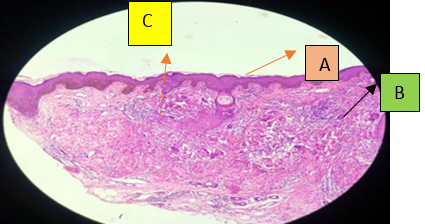 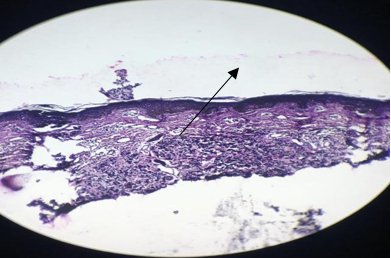 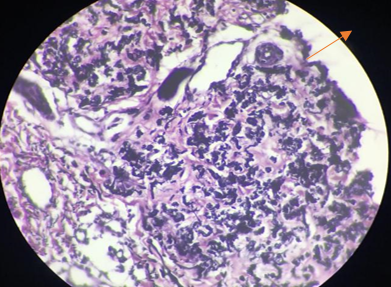 Elastosis perforans serpiginosa (EPS) is a rare disorder classified as a primary perforating dermatosis  characterised by transepidermal elimination of elastin fibres. 4 EPS first described by Lutz in 1953. 5 They clinically present as small asymptomatic hyperkeratotic papules that are arranged in serpiginous manner most commonly distributed over neck, face, arms and flexural areas. Pathogenesis for EPS remain unknown. Other possible factors that6 trigger EPS are Down syndrome, Scabies, osteogenesis imperfecta Scleroderma and other connective disorders like Marfans syndrome, cutis laxa, and pseudoxanthoma elasticum7 and in chronic renal failure. Other commonly encountered cases for EPS are patients on pencillamine therapy.1 It can occur Denovo without any underlying cause. It has to be differentiated from other perforating disorders. EPS best diagnosed with a biopsy and histological examination. histopathology of hyperkeratotic papules revealed a crater that is filled with eosinophilic material that are extruding out are elastic fibres this confirmed with the special stain vongieson stain. vongieson stain the elastic fibers as black. The treatment modalities include topicals such as tretinion (o.1%, 0.05 %) steroids and imiquimiod, tazoretene, glycolic acid, salicylic acid and intralesional steroids, oral retinoids and curettage. Other treatment modalities include carbon-dioxide laser, ND: YAG laser and Pulsed dye laser of (585 nm, 6.0 -7.0 j/cm2).8

Cutis laxa is a rare connective disease characterised by loose Pendulous in elastic skin that may be inherited9 cause or acquired. Acquired cutis laxa is rarer cause than congenital. They are of two types in acquired type generalised (adult onset mostly), Localised -Marshall’s syndrome (seen in younger people). Acquired form occur secondary to any infections, trauma, eczemas, urticarial. Diagnosis is usually by clinical suspicion and confirmed by skin biopsy and histopathological examination. Histopathology of lesion shows normal epidermis with diminished elastic fibres, infiltration and elastic fibres are fragmented in dermis. It has to be differentiated from other connective tissue disease by Vongiesonstain.10 Treatment of cutis laxa is mainly conservative.

The association of EPS in a case of acquired cutis laxa is very rarely reported hence we are reporting this case.