An unusual case report of nevoid hyperkeratosis of areola

Nevoid hyperkeratosis of the nipple and/or areola (NHNA) is a rare and benign condition first described by Tauber in 1923. NHNA mostly reported in female patients of child bearing age affecting both the nipples. The aetiology is not well defined and similarly the treatment is empirical. Usually the patient seeks treatment for the cosmetic appearance. Here we report a case of 17-year-old male presented with hyperpigmented to skin coloured verrucous plaques on either side of the right nipple which are asymptomatic and gradually increasing in size since six years. The histopathological features are consistent with nevoid hyperplasia of areola. Till now NHNA has not been reported in young males hence, we report a case of Nevoid hyperkeratosis of the areola in a young male.

Tauber in 1923. NHNA mostly reported in female patients of child bearing age affecting both the nipples and areola.1, 2, 3, 4 Conditions such as Paget’s disease, basal cell carcinoma, seborrheic keratosis and frictional hyperkeratosis should be considered under differential diagnosis.5 The etiology is not well defined and similarly the treatment is empirical. Usually the patient seeks treatment for the cosmetic appearance.

A 17-year-old male presented to our department with two irregular skin colored to hyperpigmented asymptomatic lesions over the right areola of 5 years duration [Figure 1]. They started as small mustard size lesions during puberty (at the age of 12 years) and gradually increased in size and number to attain the present size. No history of itching, pain and bloody discharge. No history of any ulceration. No history of any hormone replacement therapy.No other systemic complaints. Not known atopic and no family history of atopy. No similar complaints in other family members. 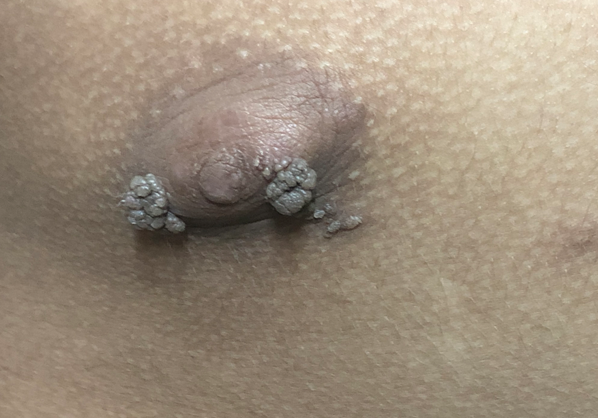 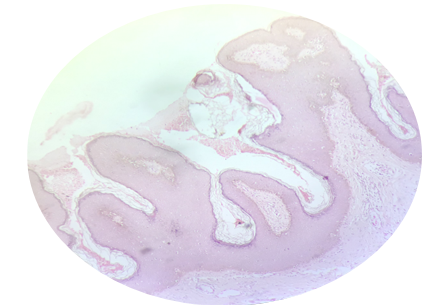 Histopathology of NHNA:downward filiform elongation of rete ridges,which are anastomising each other (H &E, X10) 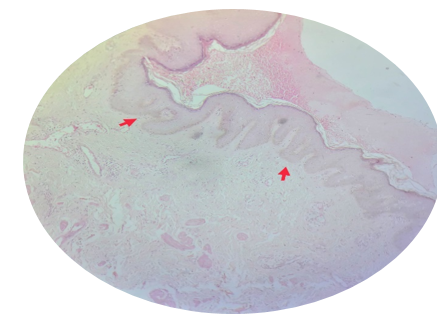 Histopathology sections show papillomatous hyperkeratotic surface with multiple clusters of dilated vessels, downward filiform rete ridges anastomosing to each other with mild lymphocytic infiltration within the dermis. We came to the final diagnosis of NHNA [Figure 2, Figure 3]

She was reassured about the benign nature of the disease and was advice to use keratolytics and steroids with no cosmetic improvement, then complete excision was done, and the patient was followed for 1 year without any recurrences.

NHNA is a rare, benign disease mostly seen in females of child bearing age.1, 3, 4 It is characterized by brown and verrucous thickening of the nipple and/or areola unilaterally or bilaterally. Rarely, hyperkeratotic patches may extend beyond the areolar region. Its etiology remains poorly understood. Few cases were reported - drug-induced, estrogens (for prostatic cancer), spironolactone, and vemurafenib (anti-cancer medication). NHNA occurrence and aggravation around puberty and pregnancy support the theory that NHNA might be a hormonal hyperkeratosis.6, 7

Recently it is classified into 2