Background: COVID-19 pandemic has caused marked economic, social, and health impacts. People affected by leprosy have additionally been hit via way of means by the pandemic. Many patients have missed their monthly medications. Here is a report of one such case who presented with vasculonecrotic erythema nodosum due to discontinuation of MB MDT therapy.

Case presentation: A 26-year-old man affected with leprosy presented to our OPD with a 2- month history of fever, hemorrhagic blisters and ulcers over extremities. On examination, purpuric plaques, hemorrhagic bullae and necrotic ulcers were found on the face and extremities along with erythematous edematous lesions on the trunk. The diagnosis of vasculonecrotic erythema nodosum was made with the characteristic clinical and diagnostic features.

Conclusion: Leprosy is a chronic disease with various atypical, rare and unrecognizable manifestations. Early diagnosis and prompt treatment are needed to reduce morbidity and mortality. In this Covid situation, special attention should be paid to chronic diseases such as leprosy by giving appropriate guidelines on how to treat them.

The COVID-19 pandemic is having a destructive impact on leprosy patients, as everyone with non-urgent health conditions are discouraged from visiting hospitals and clinics. This condition makes it much more tedious to complete the leprosy treatment course and manage the lepra reactions.

A 26-year old man presented with fever, tender hemorrhagic blisters and ulcers on his extremities for 2 months. He was diagnosed as a case of lepromatous leprosy and was started with World Health Organization (WHO) multi drug therapy (MDT) multibacillary (MB adult) regimen. Due to Covid lockdown he discontinued MDT therapy. His dermatological examination revealed multiple tender hemorrhagic blisters, purpuric patches, and ulcers over the face and extremities along with erythematous edematous lesions over the trunk [Figure 1, Figure 2, Figure 3]. The ulcers had punched out margins with necrotic tissue on the floor. Bilateral glove and stocking anesthesia was present, with symmetrically thickened ulnar, radial cutaneous, ulnar cutaneous, lateral popliteal, posterior tibial and sural nerves. The results of the motor examination and cranial nerve examination were within normal limits. The general examination revealed tender inguinal lymphadenopathy. Clinical diagnosis of lepromatous leprosy with lucio phenomenon, necrotic erythema nodosum leprosum, vasculopathy or medium vessel vasculitis was considered. Investigations revealed an increase in neutrophilics and an increase in the erythrocyte sedimentation rate. Liver and renal function tests and urine examination were all normal. VDRL (Venereal disease research laboratory test) for syphilis, ELISA for human immunodeficiency virus (HIV), and hepatitis B surface antigen were negative. Urine test was negative for porphyrins. Serum cryoglobulins, rheumatoid factor (RF), and antinuclear antibodies (ANA) were negative. The skin smear showed a bacteriological index of 6+ with globi. Histopathology revealed diffuse infiltration of bacilli in the epidermis, dermis, and surrounding appendages as well as dense infiltrate of neutrophils with vasculitis. Based upon clinical and laboratory features, the patient was diagnosed as lepromatous leprosy with severe vasculonecrotic ENL. The patient was restarted with MB MDT along with prednisolone (40 mg/day). Prednisolone was reduced by 5 mg every 2 weeks and then discontinued. The ulcers slowly healed with depigmented scars after few weeks. 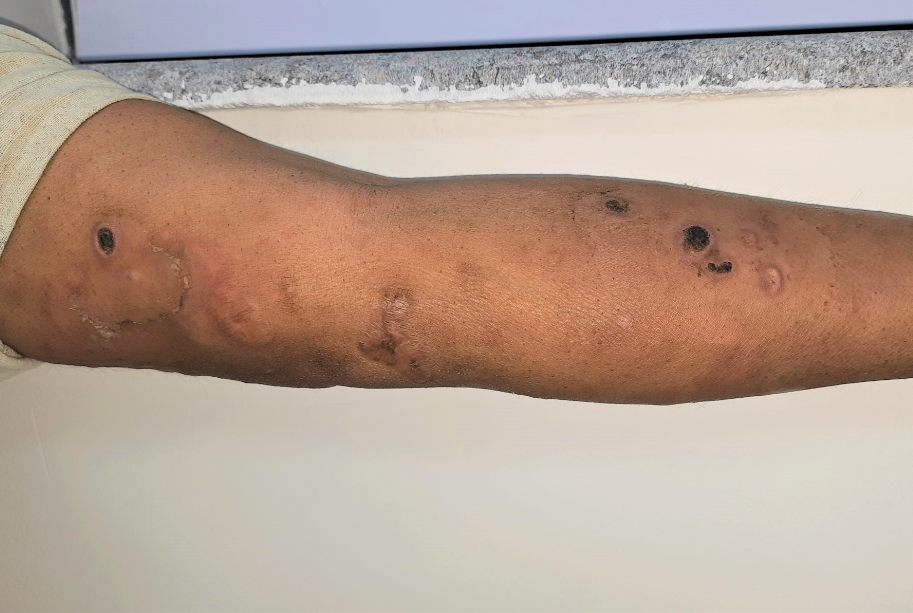 Necrotic ulcers over the forehead 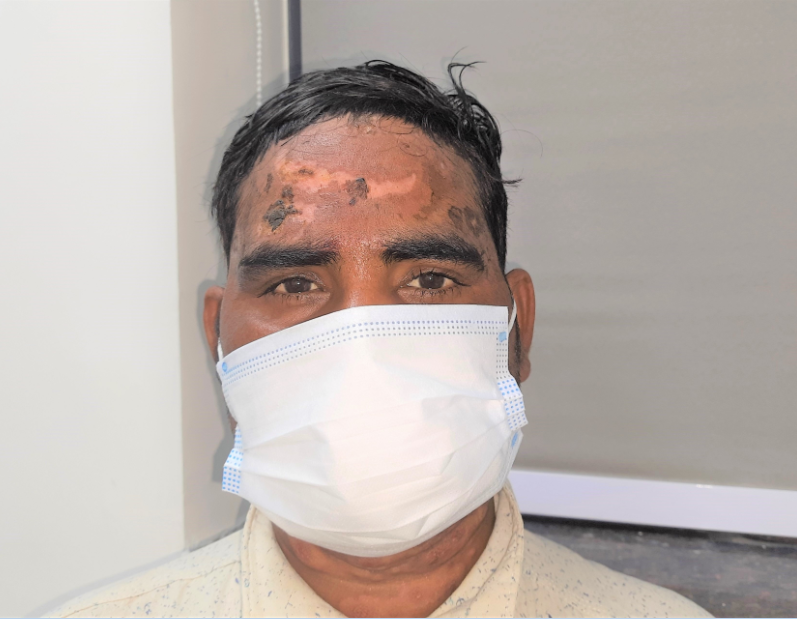 Erythematous edematous lesions over the trunk. 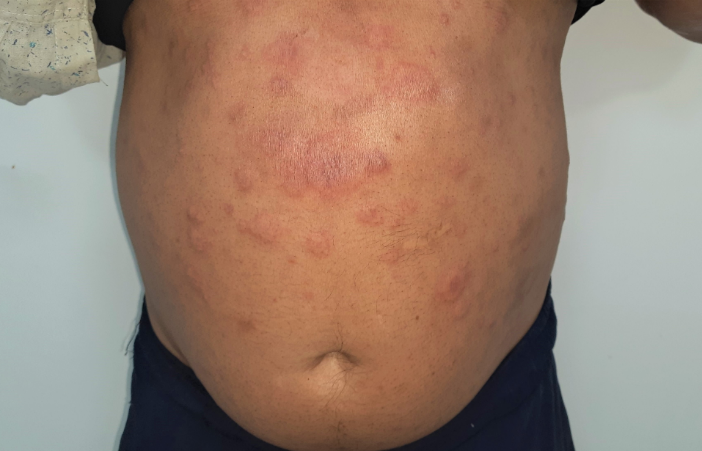 Vasculonecrotic reactions in patients with BL and LL may present as lucio phenomenon or as necrotic erythema nodosum.

Both necrotic erythema nodosum leprosum and lucio phenomenon may be similar in clinical presentation and histopathology. Histopathology of the lucio phenomenon generally shows infiltration of acid-fast bacilli singly or as globi within macrophages and endothelial cells of the vesssel wall. Leukocytoclastic vasculitis may be observed in small vessels with endothelial cell proliferation, thrombosis, and ischemic necrosis. Histopathology of Vasculonecrotic erythema nodosum usually showed necrotizing vasculitis with neutrophilic infiltrate, but no involvement of medium sized vessels, thrombosis or endothelial infiltration by acid-fast bacilli.4 The study by Bernard and colleagues showed how to distinguish the lucio phenomenon from the necrotic erythema nodosum.5

The lucio phenomenon is a reactive state resulting from spontaneous multiplication of lepra bacilli leading to diffuse organ involvement in a dormant setting. There is increased exposure of mycobacterial antigens to circulating antibodies, leading to vasculitis. Latapi and Zamora suggested that this was a hypersensitivity reaction due to a high antigenic load because of the synergy between M. leprae and cocci causing further infection.6 Recently it was observed that it was due to the unrestricted proliferation of Mycobacterium lepromatosis sp. nov, a newly discovered species whose features manifest into distinct clinical and pathological features.7 MDT for multibacillary leprosy is effective in the treatment of lucio phenomenon. The role of corticosteroids is controversial. Thalidomide and clofazimine are less effective.8

Erythema Nodosum Leprosum (ENL) is an immune complex-mediated response that occurs in multibacillary leprosy where Tumor necrosis factor-α (TNF-α), a pro-inflammatory cytokine and plays a major role.9 Vasculonecrotic erythema nodosum is a severe type of ENL. Multiple drug therapy (MB-MDT) with prednisolone must be given for 12 weeks. Thalidomide is now considered the drug of choice for ENL. Anti-inflammatory clofazimine can be used in chronic and severe ENL as a steroid-sparing agent.10

In our patient vasculonecrotic erythema nodosum occurred after discontinuation of MDT therapy at third month due to Covid lockdown. The implemented lockdown is challenging with minimal availability of public transport and minimal staff working to treat patients. MDT must be delivered by healthcare workers to the respective patients in person or in an easy accessible area closest to those areas. A-MDT (accompanied MDT) drugs must be provided for all registered leprosy patients for three to six months, avoiding their monthly follow up. We should realize the difficulties faced by the leprosy community and follow necessary guidelines as per recommendation of the committee of experts.11