Background: Psoriasis is an immuno-mediated chronic systemic disease involving cytokines of helper Th1 pathway. Vitamin D has an effect on keratinocyte proliferation, differentiation and immune modulation of immune system especially Th1 pathway, which is altered in psoriatic skin suggesting that Vitamin D may have a role in pathogenesis of psoriasis.

Results: Vitamin D deficiency in the study was 22.8% in patients and 14% in control group. Vitamin D insufficiency was found in 42.1% of cases and 19.3% of control. According to chi-square the p-value is 0.003 showing significant association. There was a tendency towards decrease in vitamin D level with increase in disease duration. There was negative correlation between vitamin D and PASI score.

Psoriasis is a multi-factorial chronic inflammatory skin disease. It is characterized by erythematous, oedematous plaque with silvery white micaceous scale. Histologically, there is disordered keratinization with increase cell turn-over, perivascular mixed inflammatory infiltrate and tortuous, dilated vessels. The prevalence varies from 0.44% - 2.8% in India; 1 with equal sex ratio and bimodal age of onset.

Its aetiology is unknown; involving various environmental, genetic and immunological factors. On the basis of HLA-Cw6 association it is divided into type 1 psoriasis which is early onset HLA associated and type 2 psoriasis which is late onset HLA not associated. According to genome wide association studies there are mainly 9 psoriasis susceptible genes (PSORS 1-9) known which accounts for psoriasis risk. It involves both type of immune system with classical involvement of Th1, Th17, Th22 pathway.

Upon damage to keratinocyte due to any cause in psoriasis susceptible individual there is increased production of antimicrobial peptide (LL-37) and various cytokines mainly TNF alpha, INF gamma, IL 6, IL 1beta, IL 12, IL 23 via activated dendritic cell resulting in T cell differentiation, keratinocyte hyper-proliferation and neutrophil and lymphocyte infiltration forming a psoriatic plaque. There is a cross-talk between epidermal and dermal cells with release of various growth factors and chemokines forming a self-perpetuating inflammatory loop.

Psoriasis is classified into many types, most common being chronic plaque psoriasis also known as psoriasis vulgaris.

Vitamin D functions as a hormone and synthesized via photochemical reaction in the skin by UVB radiation and hydroxylation of ProvitaminD3 (7-dehydrocholesterol) in liver and kidney. 2 The active form of vitamin D [25(OH)D] through Vitamin D receptor (VDR) which is present on keratinocyte and T cells. It regulates keratinocyte maturation, apoptosis, cutaneous immune response via influencing dendritic and T cell function, inducing regulatory T cell and shifting towards Th2 profile and down regulating various cytokines including IL-2, IL-6 and IL-12, IFN-γ, TNF-α and TNFβ, also suppresses NK cell and neutrophil functions thereby exerting anti-inflammatory, immuno-modulatory and anti-proliferative effect. 3, 4, 5, 6

Current knowledge has stressed upon the immuno-modulating effect of vitamin D and its usefulness in reducing clinical severity and long term need of medication with altering the risk profile for several metabolic disorder.

Clinically diagnosed 57 patients of chronic plaque psoriasis and 57 healthy controls were studied during a period of January 2020 – December 2020.

This was an observational case-control study where detailed and informed consent was taken from both the groups. A detailed history was inquired and clinical examination was done with evaluation of serum vitamin D levels.

Other types of psoriasis patient and those on treatment, which might influence vitamin D status.

There was 18.4 % prevalence of vitamin D deficiency in the study subjects.

Association between and vitamin D level 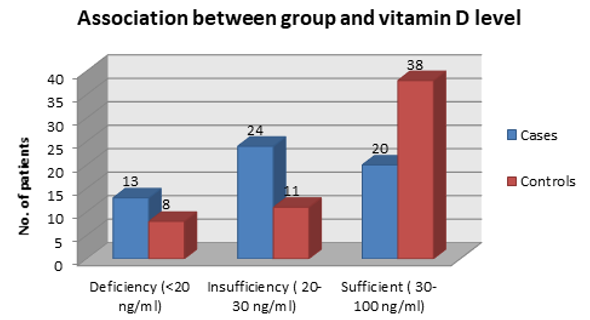 We found a significant (p<0.01) association of vitamin D levels among cases and controls.

In this study, majority [68 (59.6%)] of patients belonged to rural areas may be because the study was done in semi-urban area.

The mean vitamin D among cases were 31.55 ± 15.76 ng/ml and controls were 42.59 ± 16.92 ng/ml. This showed a highly significant difference of vitamin D levels between cases and controls (p < 0.000). This result was found to be consistent when compared with the other studies done in other parts of the world.

It is now considered that psoriasis is a systemic inflammatory disease, mainly involving Th1-Th17-Th22 immune pathway. It presents as abnormal keratinocyte hyperproliferation and infiltration of inflammatory cells. Vitamin D is known to regulate at physiological level cell differentiation and proliferation, immune modulation, expression of K1 and K10 and normal distribution of integrins. These suggests that vitamin D may have a role in psoriasis. The serum level of vitamin D is affected by various factors like polymorphism or deficiency of Vitamin D receptor (VDR), which is required for active vitamin D uptake and function, less dietary intake or intake of food items or drug which interfere with vitamin D synthesis and activation, adequate sun-exposure and clothing for cutaneous synthesis of vitamin D which is disturbed as psoriasis patient tend to cover their affected area. Various metabolic disorder tends to reduce the bioavailability of circulating vitamin D via accumulating it in fat cells.

To conclude, our study showed a significant correlation of psoriasis with vitamin D but it is still not clear to say that serum vitamin D levels interfere with psoriasis disease duration or severity. Further meta-analysis is required to understand the exact correlation.

There was no financial support received for the work.

The author has no conflict of interest to declare.