Assessment of clinical and etiological factors in nail dyschromias

Background: Healthy nails appear smooth and have consistent coloring. Nail dyschromias have a wide variety of presentation. There are numerous causes of discoloration of the nail affecting the nail plate, nail attachments, or the substance of the nail. Different pattern of nail dyschromias can point out certain dermatological or systemic diseases.

Aim: To evaluate the causes of nail dyschromias in our clinical setting.

Conclusions: Examination of nail should always be a part of routine cutaneous examination and presentation with nail dyschromias should be worked up with the help of a good history and examination. Careful examination of the nail may help in identifying the root cause and many a times unravels some underlying systemic disorder

Nail abnormalities can be a revealing sign of a systemic disease. Nail dyschromia or chromonychia is defined as an abnormality in the color of the substance or the surface of the nail plate or subungual tissue.1 The discoloration specifically due to the deposition of melanin is labeled as nail pigmentation.1 Melanonychia, as a variant, is defined as brown or black pigmentation of nails.1, 2

Nails of both limbs should be always examined in totality apart from the affected nail, preferably prior to the examination of the affected nail to avoid bias. However, prior to this, a detailed history is necessary, especially to rule out presence of any exogenously added pigmentation of the nail (e.g. Henna). When the discoloration is secondary to exogenous agents, the pattern lies along the curve of the proximal nail fold; if internal, follows the curve of the lunula.2

A working anatomical knowledge of the nail, its attachments and the underlying tissues is imperative to analyze the factors that cause discoloration of an otherwise transparent nail.1 A systemic disease can affect one or all nails simultaneously, but a localized affect can alter the colour of the one or two nails maximally, limiting the involvement.2 In addition, a quick but thorough cutaneous and mucosal examination is desired as these may many a times provide an important clue to an underlying disease. Few morphological changes might occur otherwise in an apparently normal healthy individual. An idea of this may help avert unnecessary work up in these individuals. 3

There can be several causes of Melanonychia, a brief description of which is mentioned in Figure 1.

The aim of the study is to find out the different causes of nail dyschromias. It was a cross sectional study done from April 2015 to July 2015 at tertiary hospital in Bangalore. 200 patients above the age of 18 years, presenting with nail discoloration were included in the study. A detailed history including occupation, hobbies, and illnesses (systemic and dermatological), medications, past treatments, family history, trauma to the nail, type of footwear, manicure and pedicure treatment was noted in a semi structured pro forma. 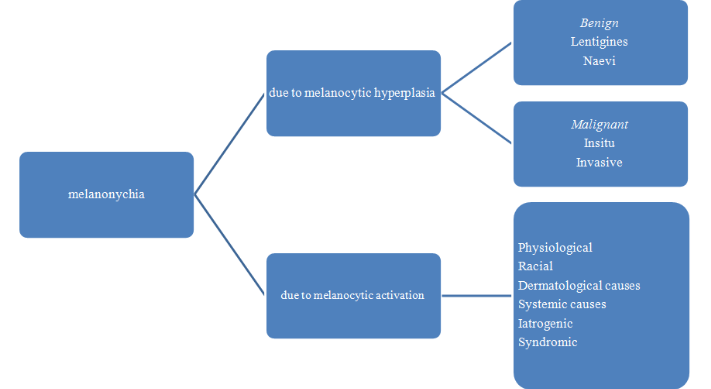 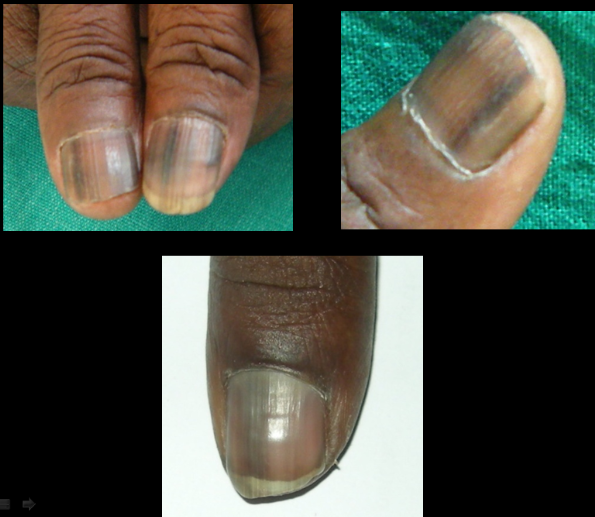 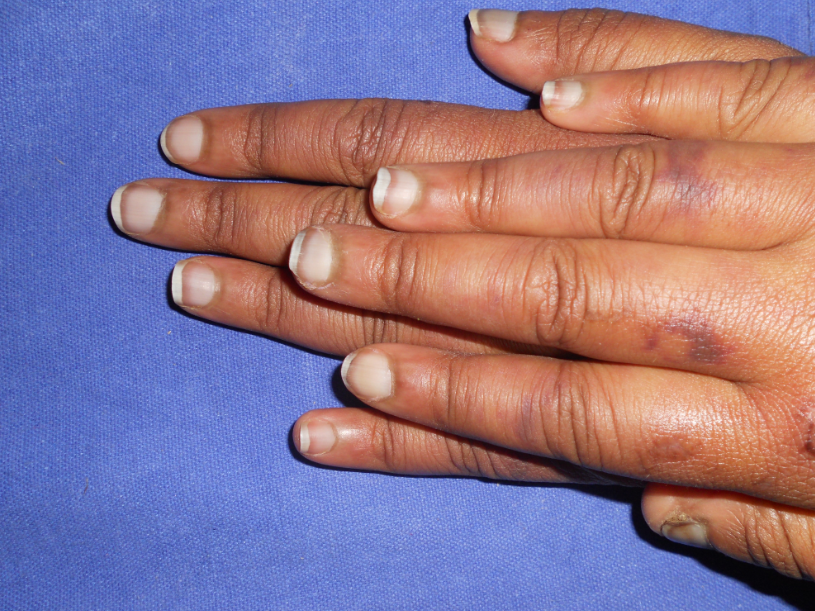 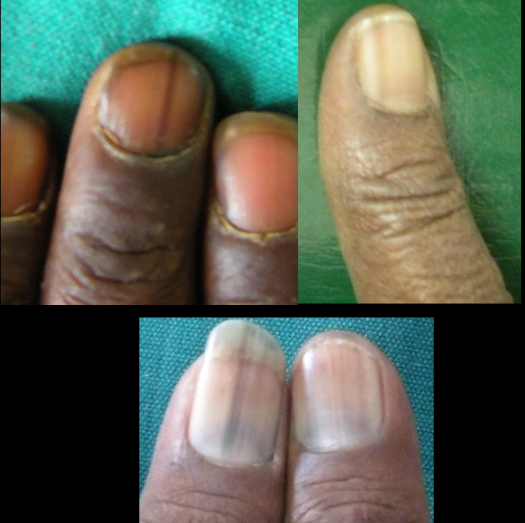 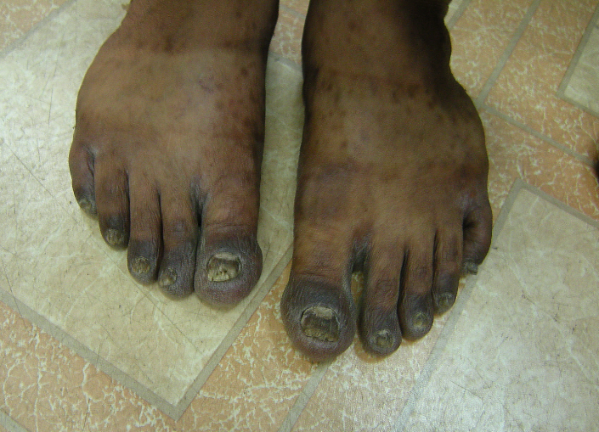 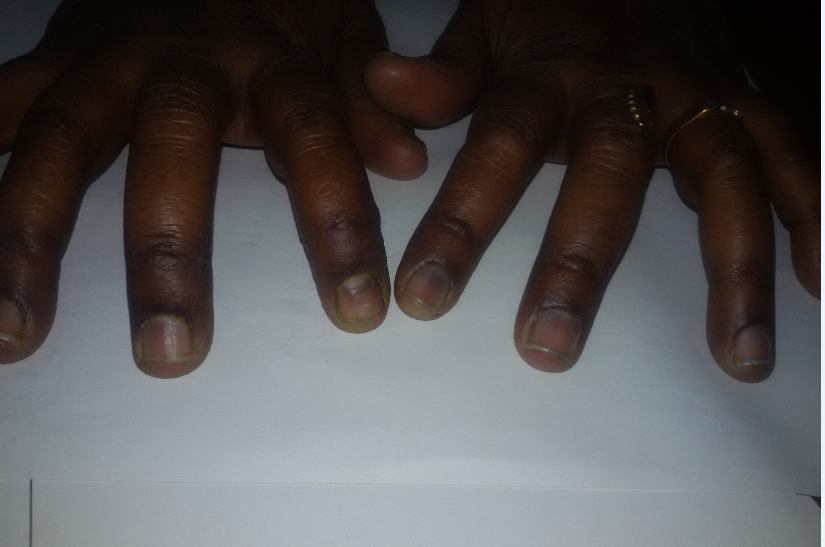 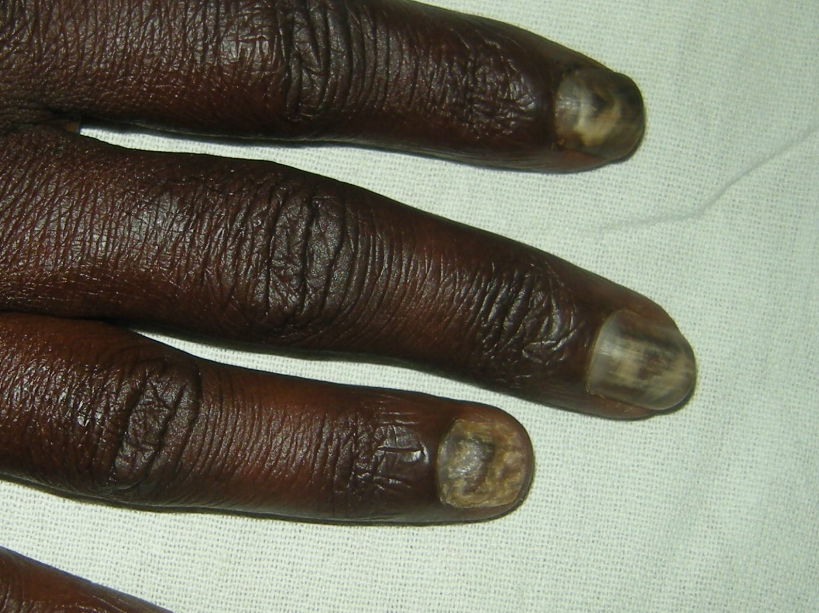 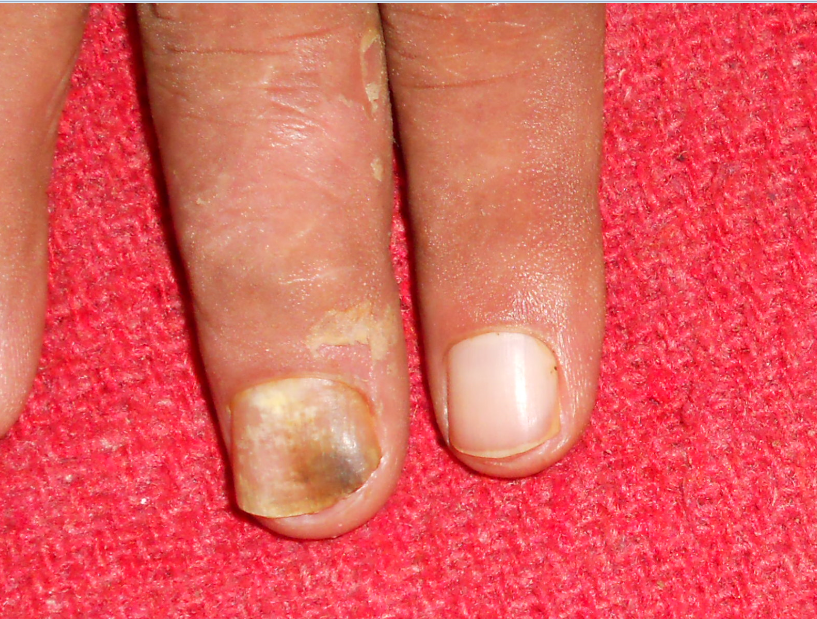 Orange chromonychia (exogenous due to henna) 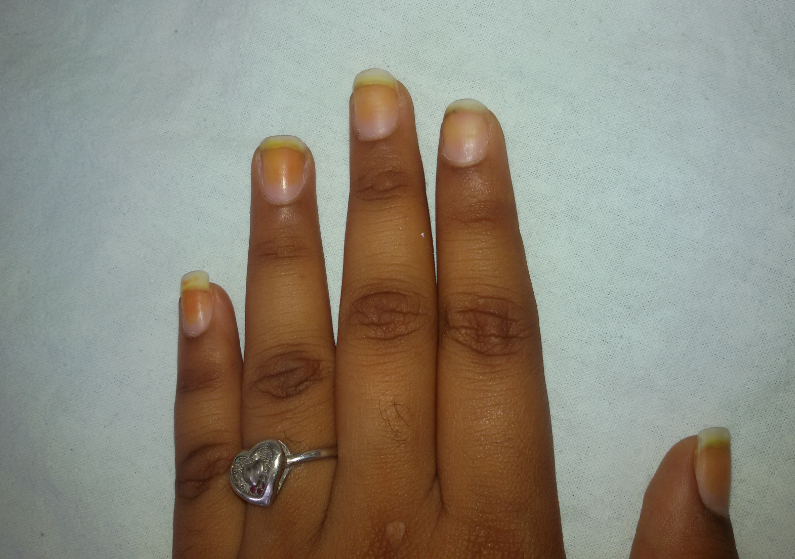 Melanonychia due to lichen planus 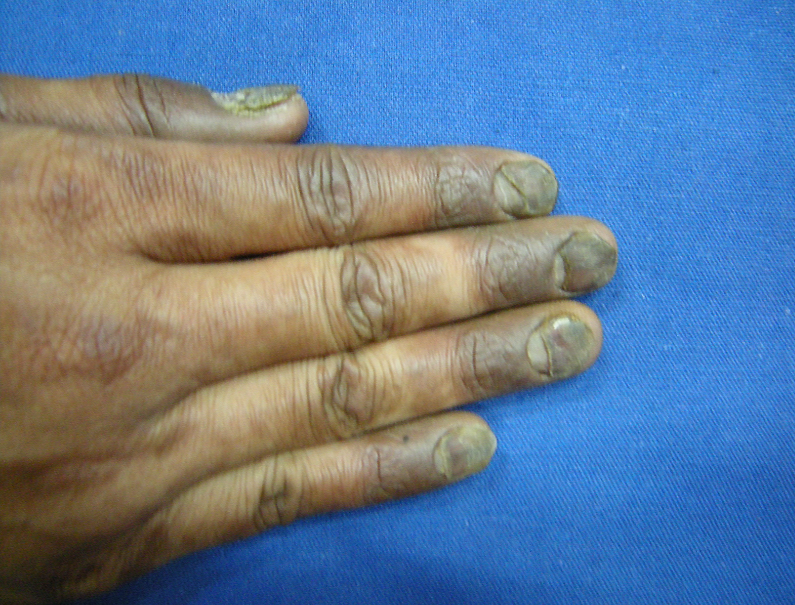 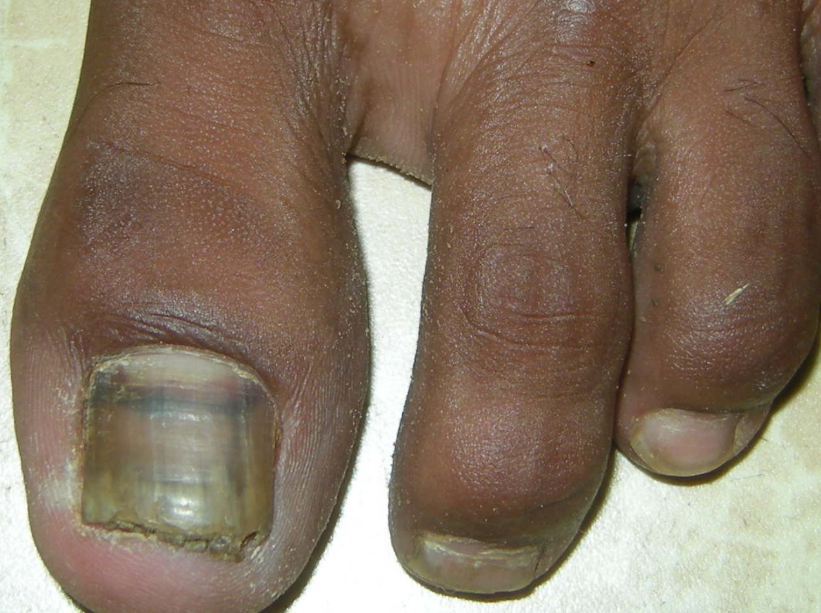 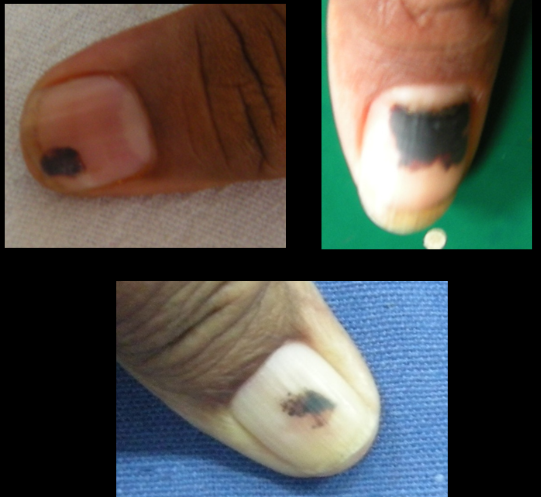 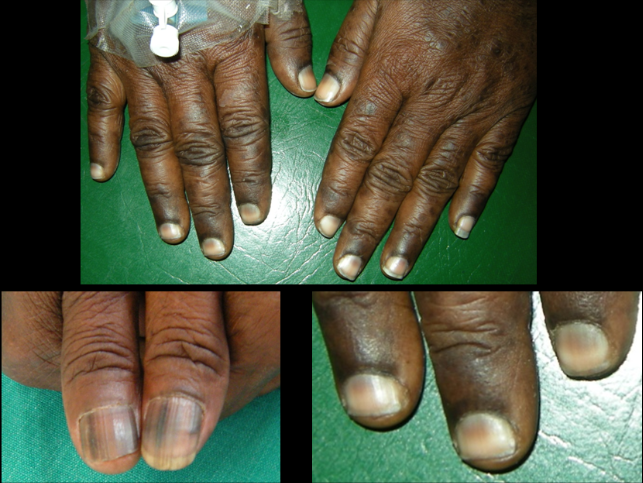 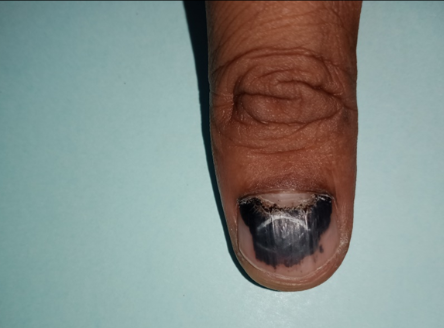 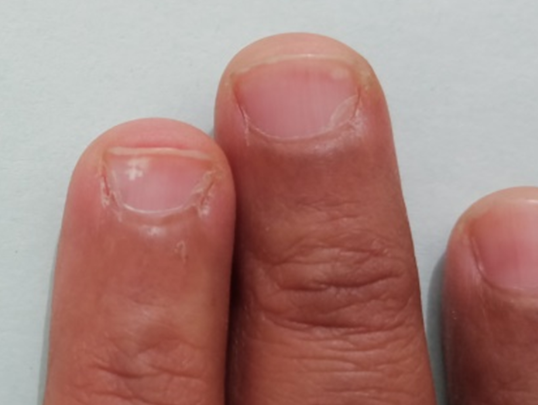 Vitamin B12 deficiency nails with pigmentation in palmar creases

Longitudinal erythronychia with V nicking of nails in darier’s disease 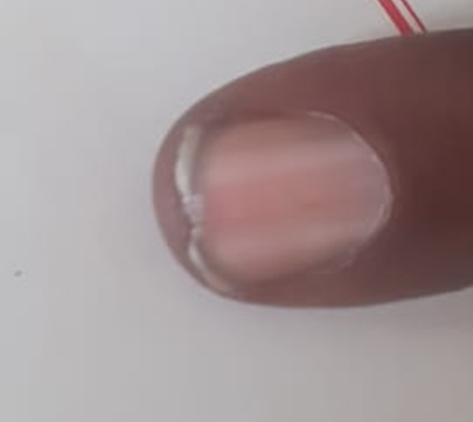 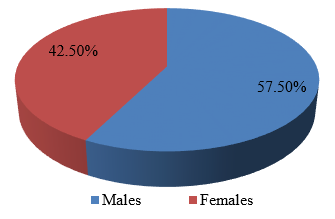 Occupation of the patients 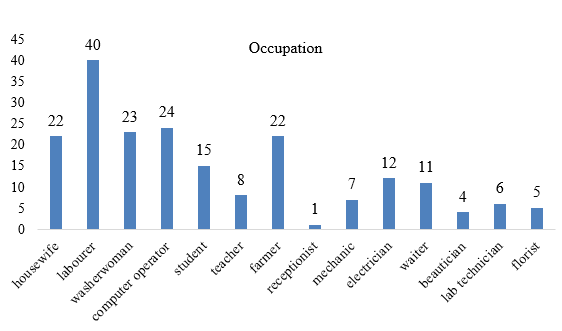 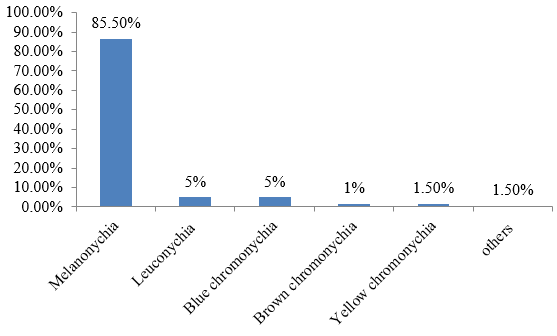 Nail dyschromias as a common disorder encountered by dermatologists, even general practitioners, on a day-to-day basis. This is secondary to pigmentation of the nail bed or plate and can be attributed to various endogenous (localized or systemic) or exogenous causes. The type of the nail dyschromia depends on the pigment deposited, the region and its duration.

Hobbies play an important role in the identification of the cause of nail dyschromia, as they contribute as an exogenous factor. In our study, we found that sports was the most common hobby amongst the study participants. This was like the findings in a study done by Yildirimer L et al,5 where injuries due to sports related trauma (crush injuries) was a leading cause of nail dyschromia.

Melanonychia was the most common dyschromia (85.5%) seen in this study. In the present study, drug induced and systemic infection like HIV contributed largely to melanonychia whereas local and dermatological conditions contributed to few. This is in accordance with other studies done on nail pigmentations.

Among the drug induced, 30% were due to antiretroviral drugs like zidovudine, lamivudine, others were due chemotherapatic agents and antimalarials. This can be attributed to the cause that our institute was referral centre for HIV and ART centre. In this study, we did not find any subungual melanoma or naevus or wart presenting with melanonychia. However, in a study done by Soo Hyeon Bae et al, 33.3% patients had naevus of the nail matrix.

In this, we observed 10 cases (5%) of blue nails, which was due to chemotherapeutic medication like doxorubicin, cyclophosphamide and antimalarials. In a study done by Soo Hyeon Bae et al, blue nails was seen only in a small percentage of the study population (1.3%). In a study done by P F Levey and team 7 in Africans, they found that HIV infection and the treatment is a cause for blue nails. Yellow discoloration of nails (5 in number) was seen in 2 cases of onychomycosis and in 3 cases of jaundice due to liver disorder. In a study by Brzeziński P et al,8 the cause of the yellow nail discoloration was due to chronic pulmonary disease. Similar findings were recorded by Piraccini and team.9 We found one case each on longitudinal erythronychia in Darier’s disease, green nails due to pseudomonas infection and orange discoloration of nails due to henna.

Nail being a small apparatus can reveal underlying systemic or local disorders. It’s important to examine nail routinely and worked up with detailed history and investigations