The clinical type and etiological agents of superficial dermatophytosis: A cross sectional study

Introduction: Dermatophytosis are fungal infections caused by three genera of fungi that have the unique ability to invade and multiply within keratinized tissue (hair, skin, and nails). Although dermatomycoses are globally distributed, the endemic and most prevalent species of dermatophytosis differ strikingly from one geographic locality to another. Changing trend has been noticed in last few years with dermatophytic infections presenting as chronic, treatment unresponsive and recurrent. Also various microscopic and fungal culture studies have shown shift in identification of causative fungal species in recent years. Numerous studies have been done on the occurrence of dermatophytes in various parts of our country illustrating the range and changing pattern of fungal infection as well as causative fungal species.

Materials and Methods: Total number of 150 patients attending outpatient department of our hospital who were clinically diagnosed as having superficial dermatophytosis were enrolled into the study. Patients were carefully screened as per inclusion and exclusion criteria and then enrolled in the study. Samples were taken from all the patients and examined for KOH direct microscopy and sent for fungal culture on Sabouraud’s Dextrose Agar as well as on Dermtophyte Test Medium. Results were then analyzed using standard statistical methods.

Results: Out of total 150 patients, 101 were males and 49 were females. Most common age group was 21-30 years (37.3%). 58 patients (38.7%) showed positivity to KOH microscopy as well as fungal culture. Additionally 25 more samples demonstrated positivity to KOH microscopy (total 83 patients) but negativity to culture, while 9 patient samples were positive to culture but negative to direct microscopy. Predominant fungal species isolated on culture was Trichophyton mentagrophytes (50.7%) while next common species isolated was T. tonsurans (29.9%). No significant association was found between dermatophyte isolate on culture and clinical type. Trichophyton mentagrophytes and Trichophyton tonsurans were the most common species isolated among subjects with Tinea faciei, Tinea cruris and Tinea corporis.

Conclusion: The study showed a male preponderance and T. corporis was the commonest clinical type found. Majority of patients were in the 3rd decade and came within a duration of 1 month to 6 months of getting an infection. In patients diagnosed with tinea corporis, tinea cruris, tinea pedis and tinea manuum, T. mentagrophytes was the most predominant species isolated.

India is a big subcontinent with various weather as well as the topographic conditions. The hot and moist climate favours the acquisition and maintenance of fungal infections.1 This in addition to congestion, inadequate socioeconomic conditions and poor hygiene enhances the chances of getting the fungal infection. Although dermatomycoses are globally distributed, the endemic and most prevalent species of dermatophytosis differ strikingly from one geographic locality to another. 2

Numerous studies have been done on the occurrence of dermatophytes in various parts of our nation illustrating the range and changing pattern of fungal infection.1, 2, 3, 4, 5 Superficial fungal infections are the most common fungal infections. According to World Health Organization (WHO), prevalence rate of superficial mycotic infection in children in developing countries has been found to be 20-25%. 6

Dermatophytosis are fungal infections caused by three genera of fungi that have the unique ability to invade and multiply within keratinized tissue (hair, skin, and nails). These fungi, collectively called “dermatophytes”, are alike in their physiology, morphology, and pathogenicity. The three genera are Microsporum, Trichophyton, and Epidermophyton; species within these genera that do not invade keratinized tissue in animals or humans are not considered as dermatophytes. The identification of the fungal species is epidemiologically very crucial since the source of infection can be traced to prevent its transmission.7 Direct microscopic examination is conducted making use of clearing solutions (KOH or Amman’s chloral lactophenol), while sensitivity may be enriched by utilizing stains/fluorochromes such as Congo red. Histological assessment does not allow accurate assessment of the fungal species. 8

After permission for institutional ethical committee a total of 150 consenting patients of superficial dermatophytosis presenting to the out patient department were taken in the study. Exclusion criteria was patients already on antifungals, patients on any oral immunosuppressant drug, patients with poorly controlled diabetes, immuno-compromised state like HIV, diabetes, previously treated patients, onychomycosis, candidal intertrigo, pityriasis versicolor, pregnant and lactating mothers. Complete history taking and detailed clinical examination was done in all the patients. Patients were explained everything about the study and procedure. All the necessary laboratory investigations were performed in the study as per the study protocol. Specimen was collected from the affected area after it was cleaned with 70% ethyl alcohol and skin scales and crusts were collected in clean black paper. The specimen was further processed for KOH mount and culture on SDA and DTM.

For direct microscopy, the specimen was placed in a drop of 10% or 40% KOH on a microscopic slide, gentle heat was applied by passing the slide over a Bunsen flame for 3-4 times, the wet mount were covered with cover slip and left for 10-15 minutes before examination under microscope and the slides were examined under low power (10X) and high power (40X) magnification for demonstration of fungal elements. For culture on SDA and DTM, the specimen was inoculated on to two sets of test tubes, one containing Sabouraud’s dextrose agar with 0.05% chloramphenicol and 0.5% cycloheximide and the other on dermatophyte test medium. The specimen from skin were inoculated directly onto DTM and incubated at room temperature with the cap of the culture tube loose. Dermatophytes change the medium from yellow to red within 14 days.

Different deramtophytic species were identified as per their microscopic characteristics for example Microsporum canis spores are large, spindle-shaped, and thick-walled with six or more internal cells and often have a terminal knob. Trichophyton mentagrophytes was identified by long cigar-shaped macroconidia with thin walls. Trichophyton rubrum grows slowly in culture with sparse production of teardrop or peg-shaped microconidia laterally on fertile hyphae. Macroconidia, when present, are smooth-walled and narrowly club-shaped, although most isolates lack macroconidia.

For Microscopic examination of culture, the tease mount from the colony were prepared in lactophenol cotton blue and observed under low and high power objective of microscope, for the presence of hyphae, macroconidia, microconidia and other accessory structures of vegetative hyphae and the characters of each were noted.

The chi-square test was applied for comparing the frequency between different groups. The p-value was considered to be significant when less than 0.05.

Among the study population of 150, 101 were males and 49 females. The observed duration of illness was less than 1 month among 32 patients (21.3%), 1 month-6 months was reported among 62 (41.3%) and more than 6 months among 56 (37.3%) subjects. The clinical type of fungus species reported were Tinea faciei among 28 (18.7%), Tinea cruris among 84 (56.0%), Tinea corporis among 108 (72.0%), Tinea pedis among 7 (4.7%) and Tinea Manuum among 8 (5.3%) patients. There were 83 (55.3%) patient specimen which were KOH Positive, 67 (44.7%) Culture Positive and 58 (38.7%) both KOH and culture Positive. No significant association was found between Dermatophyte isolate on culture and clinical type. Trichophyton mentagrophytes and Trichophyton tonsurans was the most common species isolated among subjects with Tinea faciei, Tinea cruris and Tinea corporis.

Distribution of patients based on duration of illness.

Clinical type oftinea and their frequency in study population.

Frequency of patients showing KOH positivity, Culture positivity or both.

Showing concordance and discordance between KOH and Fungal culture positivity 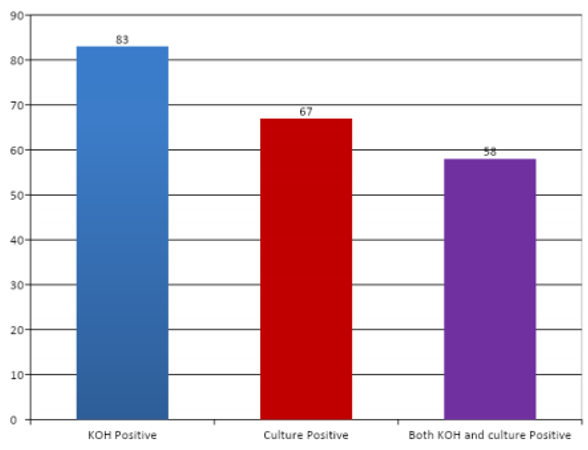 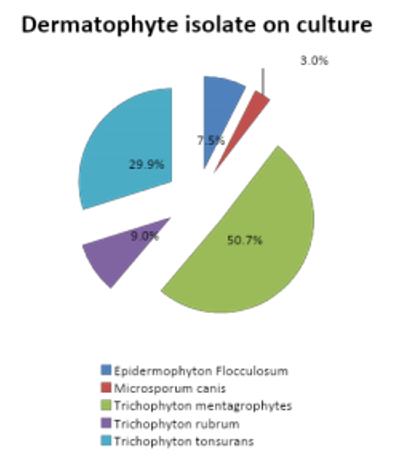 Comparison of distribution of culture positive and negative cases between different clinical types of fungus species. 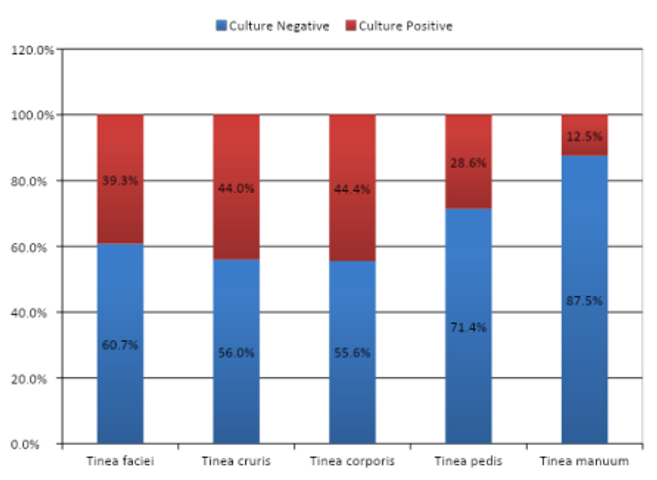 The distribution of KOH positive and negative cases was compared between different clinical types of fungus species using the chi-square test. The KOH positive cases were more among Tinea Faciei, Tinea cruris and Tinea corporis species though the difference was non-significant. 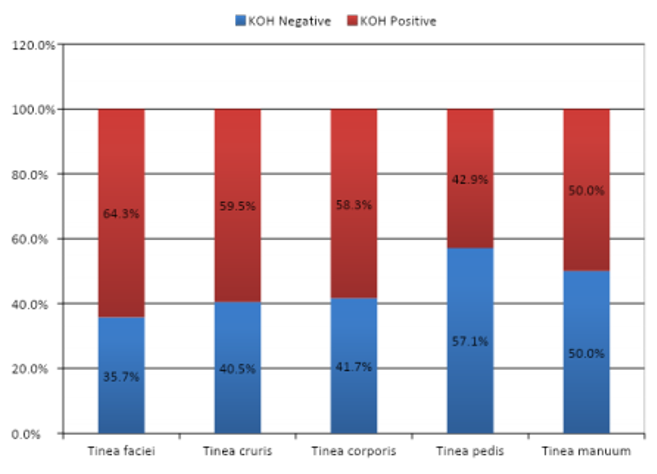 Dermatophyte isolate on culture of different clinical types of tinea.

[i] Trichophyton mentagrophytes was the most common species isolated among subjects with Tinea faciei, Tinea cruris and Tinea corporis.

The studies on Dermatophytoses in India have received much attention in recent years because of the increasing incidence of the difficult to treat mycotic infections worldwide. Despite the current upsurge of dermatophytosis in India, it probably does not get the attention it deserves as far as scientific research is concerned. Antifungal susceptibility studies should be performed as increased and prolonged use of antifungal agents has led to the development of resistance.9

The duration of presenting illness varied from less than 1 month in 21.3%, less than 1 month-6 months was reported among 41.3% and more than 6 months among 37.3% subjects. Our observations were slightly different from the study by Gupta et al, 16 where most of the patients had a prolonged duration of illness i.e. 58.8% patient had illness for more than 6 months. This was similar to the findings by Ghuse et al, 17 where the duration of infection was 1–2 months in the majority (43.3%) of the patients and only 6.7% had the disease for 1 year.

In the current study, mixed infection was reported in majority (74.4%) of the samples among both males and females. Agrawalla et al 23 and Grando et al 24 conducted studies on anuum-mycological study of dermatophytosis observed that more than 20% of patients had two or more clinical types. In the present study, 55.3% samples were positive by direct microscopy by KOH mount, 44.7% samples were culture positive and 38.7% samples were both KOH positive and culture positive. The direct microscopy and culture findings of present study are relatively in agreement with study done by Dhyaneswari GP et al,25 (72.6% KOH positive) and Mahale RP et al, 26 (61.01% culture positive).

The culture positivity was found to be more in KOH positive cases with 38.7% cases being both KOH and culture positive. This shows that direct microscopy by KOH mount is a good screening test in the laboratory diagnosis of dermatophytosis.

This was contrasting to the research by Yadav et al, 25 T. rubrum (38.46%) was the commonest aetiological agent in majority of clinical types followed by T. mentagrophytes (33.33%), T. tonsurans (17.95%) and fungi other than Dermatophytes (10.26%) and Vineetha et al, 14 with T. rubrum was the most common species isolated in the first episode and in chronic dermatophytosis followed by T. mentagrophytes. Rare species, such as T. tonsurans and single cases of T. schoenleinii, E. floccosum and M. audouni, were isolated from chronic cases. Jain et al., 31 Agarwal et al. 20 and Bindu et al. 4 also reported dis-similar findings to our study with T. rubrum being the most common species.

The study showed a male preponderance and T. corporis was commonest clinical type found. Majority of patients were in 3rd decade and came within a duration of 1 month to 6 months of getting infection. In patients diagnosed with tinea corporis, tinea cruris, tinea pedis and tinea manuum, T. mentagrophyte was the most predominant species isolated. Further research needs to be done to confim the results.

Studies for antifungal susceptibility should be increased as dermatophytosis does not get the attention that it deserves even after the current changing trends of causative organisms and the resistance to various antifungals that it has developed.

History of antifungals. Department of DermatologyJ Am Acad199042776784