Singh, Rashmi A B, and Bothra: Clinical and dermoscopic analysis of generalised linear and whorled hypermelanosis in a child: A case report

Clinical and dermoscopic analysis of generalised linear and whorled hypermelanosis in a child: A case report

Linear and whorled nevoid hypermelanosis (LWNH) is a rare sporadic disorder of pigmentation characterised by swirls and streaks of macular pigmentation along the lines of Blaschko. It can be frequently associated with extracutaneous features. We report clinical and dermoscopic presentation of a case of generalised linear and whorled nevoid hypermelanosis in a 1-year-old child involving the trunk and extremities while sparing the face, palms, soles and mucosae without any extracutaneous features.

The entity linear and whorled nevoid hypermelanosis (LWNH) was introduced by Kalter et al. in 1988. It is characterized with the following features: (a) linear and whorled hyperpigmentation distributed asymmetrically along Blaschko’s lines; (b) starts within the first few weeks of life; (c) sporadic in incidence; (d) no preceding history vesicles or inflammation; (e) spares the mucous membranes, palms and soles and eyes; (f) histopathologically characterised by epidermal melanosis without any pigment incontinence. 1

A 1-year-old boy was referred for evaluation of reticulated hyperpigmentation that had appeared at approximately 2 weeks of age. The boy was the first child of his parents, born at term through normal vaginal delivery, to consanguineous parents with normal developmental milestones for age. 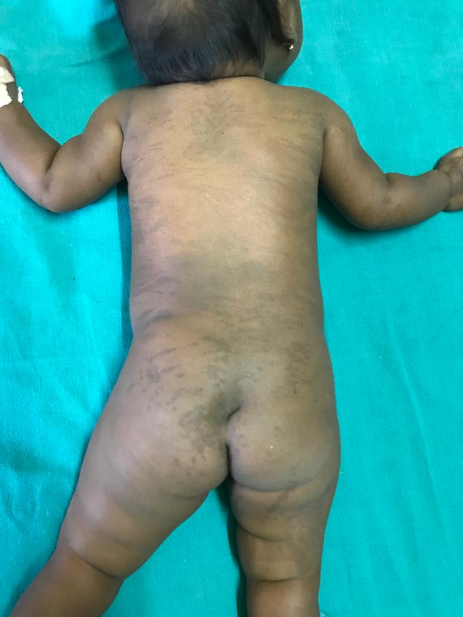 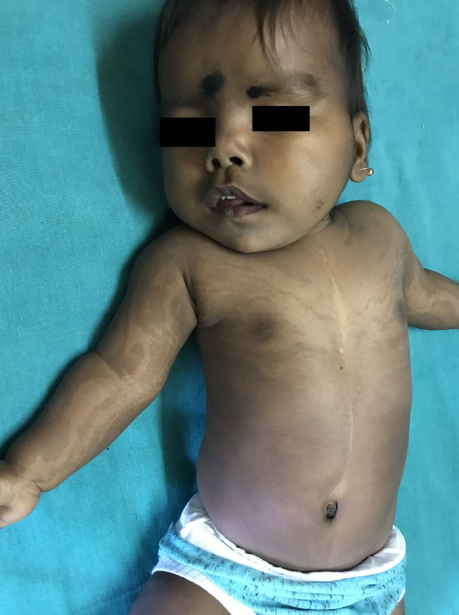 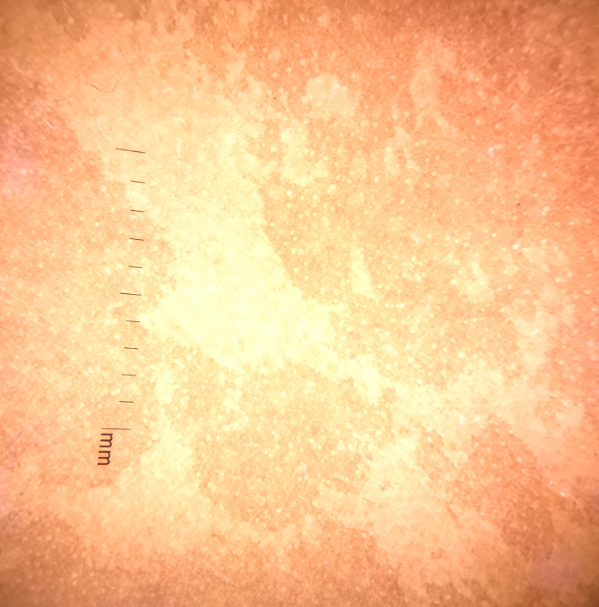 Physical examination revealed diffuse streaky macular hyperpigmentation following Blaschko’s lines starting on the trunk and extending on to the upper and lower limbs and sparing the face, palms, soles and mucosae (Figure 1, Figure 2). Texture of the skin was normal over the streaks as well as the surrounding and intervening skin. Retrospective review failed to elicit blisters or warty lesions lesions preceding the linear pigmentation. No ocular, dental, hair and nail abnormalities were present. Growth and psychomotor development were normal according to age. Dermoscopic examination revealed brownish streak –like pigmentation over the whorled areas in a linear or circular arrangement showing follicular white dots and geographical edges. (Figure 3)

Hemogram and metabolic profile were normal. Chromosomal analysis of dermal fibroblasts revealed a normal karyotype (46XY), without any evidence of chimerism or mosaicism. Linear and whorled nevoid hypermelanosis (LWNH) was diagnosed and parents were counselled of the benign nature of the disease and periodic follow up was recommended.

LWNH is a rare condition of newborns consisting of macular hypermelanosis along Blaschko’s lines, which can be diffuse or segmented.1 Also known as zebra-like hyper-pigmentation in whorls and streaks, reticulate and zosteriform hyper-pigmentation and reticulate hyperpigmentation of Lijima. LWNH is a cutaneous disorder occurring within the first few weeks of life and usually stabilizes by 2-3 years of age.2

Di Lernia et al. in 1992, suggested that Progressive cribriform and zosteriform hyperpigmentatiom (PCZH) must be considered as a part of the spectrum of LWNH as apart from later age of onset, no other differences between the two disorders exists, either clinically or histopathologically. The term ‘Diffuse LWNH’ was proposed for previous reported cases of LWNH and ‘Unilateral-form’ proposed for PCZH. 3 Occasionally, it is associated Systemic features may be seen in up to 30% 4 which include neurological (epilepsy, neurodevelopmental delay and hydrocephalus), cardiac (ventricular septal defect and tetralogy of Fallot) and musculoskeletal defects. 2

The etiopathogenesis of LWNH is possibly related to somatic mosaicism and chromosomal abnormalities including trisomy 7,14,18 and 20. Histopathologic findings show increased pigmentation in basal layers without pigment incontinence, or melanophages in the dermis. 5 Many other hyperpigmentary disorders occurring along the lines of Blaschko are included in differential diagnosis of LWNH including incontinentia pigmenti (IP), PCZH, progressive zosteriform macular pigmented lesion (PZMPL) and epidermal nevi. However, PCZH is considered as a localized variant as well as late onset variant of LWNH.5 Incontinentia Pigmenyi is characterised by initial stages of vesicles and verrucous stage followed by development of whorled pigmentation. PZMPL is characteristically accompanied by pruritus as a prodromal symptom. 6 Epidermal nevi differs from LWNH based on its hyperkeratotic nature. 7

The scarcity of generalised form of LWNH without systemic abnormalities reports prompt communication.

T Goyal Progressive acribriform and zosteriform hyperpigmentation: Where are we at present?Indian Dermatol Online J2013442646