Nevus Lipomatosus Cutaneous Superficialis (NLCS) is an uncommon hamartomatous lesion of the skin. NLCS is classified into two clinical forms classic and solitary. Some authors consider this lesion as a type of connective tissue nevus. We report a rare case of solitary NLCS in a 69 year old male with a long history of pedunculated swelling in the right gluteal cleft with review of literature. On gross appearance the lesion was a grey brown, exophytic, cerebriform, smooth skin covered soft tissue mass measuring 4.5 cms in the largest dimension with a broad peduncle attached. On histopathological examination the lesion showed superficial and deep dermal infiltration of the adipose tissue with distortion of the dermal collagen.

Nevus Lipomatosus Cutaneous Superficialis (NLCS) is an uncommon hamartomatous lesion of the skin also classified as non melanocytic skin tumor with lipomatous differentiation. NLCS is classified into two clinical forms; classic and solitary and the age of presentation depends on the form. Solitary form is more common than the classical type. In the classic form the age of presentation ranges from birth until the first three decades of life and is therefore referred to as the congenital form.1 It is also called NLCS of Hoffmann and Zurhelle. Lesions are usually multiple showing a zonal pattern. In the solitary form age ranges from the third decade to the sixth decade of life and shows a wider body surface distribution. There is no reported gender, racial or familial predilection. Since mesenchymal dermal components other than fat cells, such as collagen bundles, elastic fibres, fibroblasts, nerve fibres and blood vessels are altered in NLCS, some authors consider this lesion as a type of connective tissue nevus.

A 69 year old male presented with a long history of pedunculated swelling in the right gluteal cleft to the surgical OPD at Era’s Lucknow Medical College and Hospital, Lucknow, India. The swelling was slow growing and gradual in onset, painless and not associated with inflammation or any discomfort. Physical examination revealed single soft, well-defined, skin-coloured, cerebriform pedunculated mass measuring 4.5x3.5x2 cms. There were no associated café-au-lait macules or hypertrichosis in the area. Palpation of the lesion did not provoke any symptoms, and the rest of the physical examination result was unremarkable. The lesion clinically masqueraded as a gluteal papilloma. The lesion was completely excised and submitted for histopathological examination. On gross appearance the lesion was a grey white to grey brown, exophytic, cerebriform, smooth, skin covered soft tissue mass with attached resection stump, altogether measuring 3.5x3x2 cm (Figure 1). Cut surface revealed yellowish white and soft to firm areas. Serial sections were submitted. The histopathological examination revealed skin and subcutaneous tissue. The epidermis showed hyperkeratosis and was thrown into pseudopapillary folds showing areas of atrophy and pseudoepitheliomatous hyperplasia with horn cyst formation. Mild superficial chronic perivascular infiltrate was present. Superficial and deep dermis showed lobules of mature adipocytes in between disorganized collagen bundles. The fat occupied 50-70% of the dermis (Figure 2). Few thick walled dilated congested blood vessels were seen. There was no evidence of encapsulation or connection with the subcutaneous fat on multiple sections examined. The adnexal structures were also reduced. In view of the gross and microscopic features, our case represents an example of very rare hamartomatous cutaneous skin lesion NLCS, composed of both ectodermal and mesodermal elements. There was no evidence of granuloma or malignancy. The clinical findings, along with the histologic features, indicated a diagnosis of NLCS. 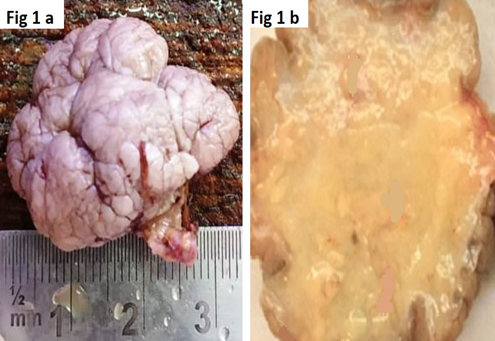 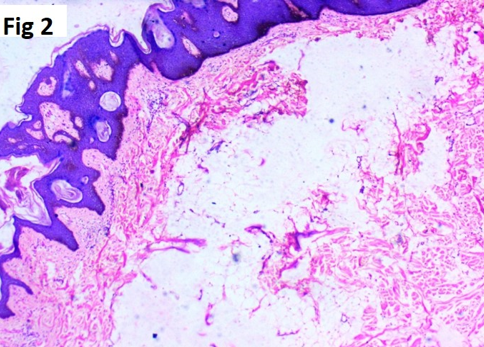 Nevus Lipomatosus Cutaneous Superficialis (NLCS), was first described by Hoffman and Zurhelle in 1921.2  Subsequently few more cases have been reported thereafter.3, 4, 5, 6 A case similar to ours was reported by Namazi MR.7 To the best of knowledge our case is among the rare ones reported to literature from India.

Lesions are asymptomatic in both forms, as observed in our patient. Various overlying skin changes have been reported, including ulceration, particularly after trauma or ischemia.8

NLCS may be associated with café-au-lait-macules, comedo like alterations,4 hypertrichosis,9 folliculosebaceous component,10 or trichofolliculoma.11 It may even mimic an acrochordon,12 or be associated with massive lipoma and diffuse lipomatosis.13 Giant NLCS have also been reported by few authors.14

Most common sites for classic form of NLCS include gluteal cleft, pelvic girdle, lumbar area, buttocks and upper thigh and rarely the scalp, face, nose, neck, shoulder, thorax, genitalia and abdomen. Solitary forms show wide range of distribution with cases reported most frequently in gluteal cleft and on other locations such as scalp, eyelid, forehead, ear, neck, axilla, trunk, clitoris, thigh, knee, calf and soles.3, 4, 5, 6 In solitary forms, a possibility of shape change from hemispherical to pedunculated is reported.5, 6

On histopathological examination NLCS reveals proliferation of mature adipocytes in the dermis with aggregates around blood vessels or eccrine glands. The epidermis may exhibit acanthosis, basket weave hyperkeratosis and increased basal pigmentation. Histopathologically, both forms are similar. There is no sexual predilection or familial predisposition.3, 4, 5, 6, 7

There are various theories of etiopathogenesis. Degenerative changes in the dermal collagen fibres and elastic tissues may lead to deposition of the ectopic adipocytes. Focal heterotopic development of the adipose tissue may be another reason. There may be development of the ectopic adipocytes from the pre adipose tissues derived from the dermal perivascular mesenchymal tissues. The theories for predilection of pelvic girdle region include persistent pressure in the pelvic girdle area during intra uterine life or thickness of the fat pad in the pelvic girdle and predisposing to fat cell disorders. A consistent genetic anomaly has not been defined in these lesions, although there is one report of nevus lipomatosus exhibiting a 2p24 deletion.16 Literature search did not reveal recurrence of the lesion at the same site or at any other location.

An important differential diagnosis that is clinically similar to NLCS is smooth muscle hamartoma, which shares similar presentation. However, histologic examination was sufficient to differentiate between these two conditions and confirm the diagnosis of NLCS in our case.