Trichblastomas are rare, benign adnexal neoplasms of hair germ origin. These tumors usually arise in the head or neck region and may undergo malignant transformation.1, 2 Because of its potential for malignant transformation; complete surgical excision with negative margins is highly recommended. Dermoscopically, clinically,and histologically sometimes it is very difficult to differentiate between BCC and TB, so in this case report we emphasize the role of various IHC markers including Ki-67/MIB-1 antibody Index at reaching definitive diagnosis so that patient can get appropriate therapy as TBs have better prognosis, lower chances of recurrence and very less likelihood of progression to malignancy.

A 60 year old male presented with a skin coloured ulcerated nodule just infront of left pinna to the Ear, Nose & Throat(ENT) outpatient department of our institute. Clincally the lesion was considered to be BCC and it was excised with wide local excision. The specimen was sent for histopathological examination.

Grossly the tumor was globular with a large ulcer in the center. On cut tumor was multi-nodular with homogenous grayish-white cut surface [Figure 1a,b].

a & b: Photomicrographs showing nodular islands of neoplastic basaloid cells having monotonous appearance just beneath the atrophic epithelium (H&E x 400). 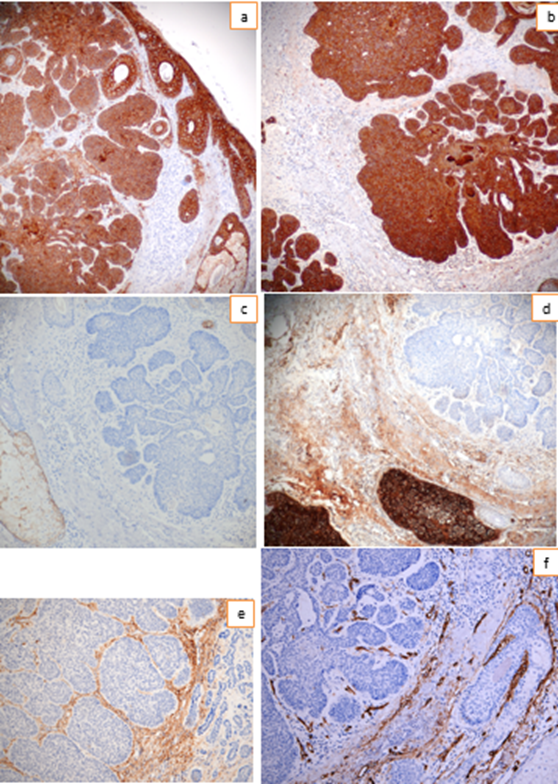 Photomicrograph showing Ki-67 index of approximately 15-20% which is low in comparision to BCC in which the labeling index is 100%. 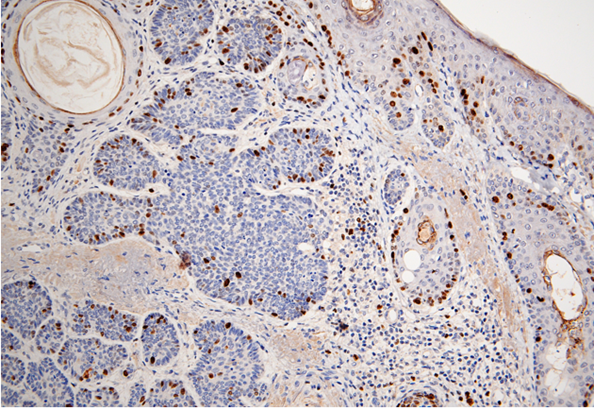 Ki-67 index was approximately 15% (24.5% at hot spots) as compared to 100% which is seen in BCC thereby ruling out the possibility of nodular basal cell carcinoma [Figure 4]. In our case inferiomedial margins were positive and at the report signout; reexcision with negative margins was highly recommended to prevent local recurrence or malignant transformation.

Trichoblastomas are are benign cutaneous adnexal tumors arising from rudimentary hair follicles. The term trichoblastoma was introduced by Headington in 1970 and in 1993, Ackerman et al. published a new classification of tumors of hair follicles describing TBs as benign tumors having sharp circumscription, smooth borders, and symmetrical growth patterns, and trichoepithelioma as a superficial type of TBs.3, 4 Ackerman classified hair follicle-derived adnexal cutaneous tumors into the following five subgroups based on their predominant morphological features: hair follicle and hamartomas, infundibular and isthmic tumors, tumors of the external layer, tumors originating from the matrix layer, and prominent perifollicular mesenchymal tumors.5 In 2018, according to the 4th World Health Organization Classification of skin tumors, hair follicle-associated neoplasms were classified into two subgroups: benign neoplasms and malignant neoplasms.6 A majority of adnexal cutaneous neoplasms are uncommon and benign.7

TBs are more common among adults between the ages of 40s & 50s; however they can occur at any age group.5  Rarely, these benign adnexal neoplasms have been reported to occur on the proximal extremities, trunk, and anogenital region.8

Basal cell carcinoma is relatively common malignancy of skin which is locally aggressive and generally do not metastasize, however complete surgical resection with postoperative radiotherapy is usually given to prevent local recurrences. Clinically basal cell carcinomas have variable appearances and commonly present as a pearly, pinkish nodules with a rolled border, and usually located in sun-exposed areas.9 Rare case reports of Basal cell carcinoma originating from non sun exposed areas have been reported in literature.10 Histologically Basal cell carcinomas are composed of basaloid nests having connections with the overlying epidermis and may exhibit varying growth patterns including infiltrative, micronodular, morpheaform etc. The cells show nuclear hyperchromasia, frequent mitosis and apoptosis. The tumor islands show characterstic clefting and myxoinflammatory stroma.11

Basal cell carcinoma shares similar histological features to trichoblastoma, including the presence of clefts between the epithelium and stroma, dermal epithelial nests, and peripheral pallisading arrangement of neoplastic cells thus mandating the need of immunochemistry to determine if the lesion is a basal cell carcinoma or trichoblastoma.9 Literature review showed that Immunohistochemistry studies have concluded that trichoblastoma and basal cell carcinoma express similar cytokeratins, including B-cell lymphoma 2 (Bcl-2), tumor protein p53, and the follicular differentiation markers like follistatin and B-lymphoma Mo-MLV insertion region 1 (Bmi-1).12, 13, 14 However, trichoblastoma stains positive for stromal cluster of differentiation (CD) antigen 10 and CD antigen 34 as well as pleckstrin homology-like domain family A member 1 (PHLDA1), a follicular stem cell marker, whereas the basal cell carcinoma does not. 13, 14 Use of IHC panels in routine diagnosis of cutaneous adnexal tumors is controversial and performed rarely.

Trichoblastomas and Basal cell carcinomas are close clinical and histological mimics resulting in diagnostic dilemmas for both clinicians and pathologists; however a panel of IHC markers and Ki-67 labelling index helps in reaching a definite diagnosis and appropriate therapeutic management of the patient without undue delay.